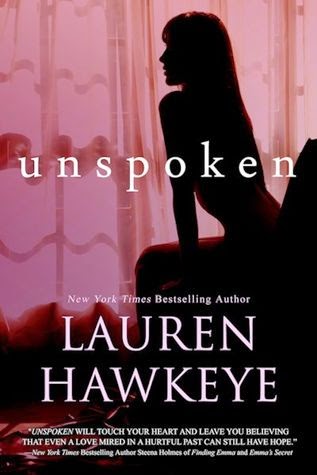 Unspoken is a prequel novella in the Florence, Arizona series by bestselling author Lauren Hawkeye. It's a pretty quick read and introduces readers to the town of Florence and some of its residents. The focus is on Eleanor "Ellie" Kendrick and Dominic "Gabe" Gabriel, two individuals who were once very much in love but whose love story was cut short by forces beyond their control and Ellie leaves Florence.

Ten years pass before Ellie returns to the small town, needing to deal with the flower shop her late grandmother left her. What she doesn't want to deal with is the past she left behind, including her ex-boyfriend Gabe. She simply wants to make the proper arrangements to sell the flower shop and return to the life she's created for herself in Colorado.

Gabe has never forgotten the rebellious teenager who made him dream of a life different from the one that was being created for him by his father. When she suddenly left town, he was told one thing and he believed it for a decade. Gabe learns several truths that he never imagined were being kept from him and now that he knows, he wants to make things right between him and Ellie.

The book basically has the main characters uncovering secrets and how those secrets affect them now. Ten years ago, the people who were supposed to look out for them took matters into their own hands and made a decision that would affect both Ellie and Gabe, though I felt that it was a case of "ignorance is bliss" on Gabe's end. He seemed like a nice guy but a tad clueless.

While Ellie and Gabe's relationship was resolved by the end of the book, there were other issues that were left up in the air. Gabe's father and Ellie's grandmother had no redeeming qualities and that implied twist in the end about the two of them had me thinking they deserved each other. Of course, that could be the reason why they made the choices that they did regarding Ellie and Gabe but I'm just guessing.

All in all, Unspoken my interest in wanting to learn what else happens in the town of Florence, Arizona. The fact that the series is set in an area that houses a high number of prisons makes it all the more interesting. There were a number of editing issues in the book and the unresolved issues did bother me a bit but the series seems promising so I'm giving this prequel 3.5 stars. ♥

Grab a copy of Unspoken, which is currently free, from Amazon | Barnes & Noble | Kobo.