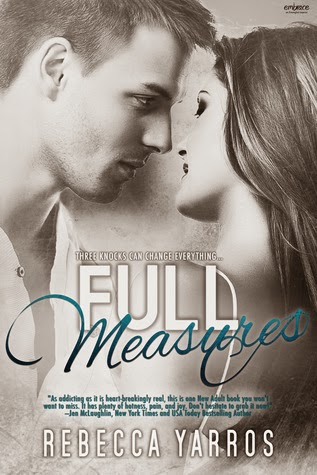 Full Measures by Rebecca Yarros has been on my TBR list for months and when I was approved on NetGalley to read and review the author's second novel, I wondered if the two books were related. For those who don't know me, I have this habit of reading books in order in a series, even if they can be read as standalones. While the two books may not be officially be part of a series, I decided to go ahead and buy this one and pre-ordered the other one when they went on sale on Amazon during Black Friday and I am SO glad I did! I'll reiterate this when I wrap up this review but it needs to be said right now: I loved, loved, LOVED this book! ♥

Twenty-year-old December "Ember" Howard has known what life in a military family is like but nothing prepares her for the three knocks on their front door, signaling the arrival of two men in uniform who have brought the most devastating news imaginable to a family like theirs. Life as they know it comes to a complete stop and she's left to hold everyone together when she sees that her mother has been swallowed up by grief and is barely able to function. The one person she thought she could lean on, her longtime boyfriend, is distracted and doesn't provide the support she needs. Then she unexpectedly crosses paths with her high school crush and being with him just feels right.

Twenty-three-year-old Joshua "Josh" Walker has always been known for his prowess on the ice and most people remember him for being a star hockey player. Nowadays, he plays for his college team and coaches a group of young kids that includes August "Gus" Howard, the youngest of the Howard siblings. When he witnesses Ember Howard's meltdown at the local grocery, his simple act of kindness belies the true nature of his affection for her, especially since he first noticed her when they were both in high school. He offers to be whatever it is Ember needs and while the attraction between them is palpable, he wants to make sure that anything more will be about them and he's willing to wait.

Ember can't seem to help herself whenever Josh is around but she doesn't want to drag him into what she feels is the current miserable state of her life. Josh never pressures her and merely makes sure that he's there whenever she may need him. When their feelings evolve into love, things appear to be going in the right direction and Ember finally feels as if everything in her life is working out. Then, a secret Josh has been keeping comes to light and Ember is taken aback by what exactly it is he's been keeping from her. While Josh feels their love will see them through, Ember isn't prepared to deal with the implications of Josh's secret. To quote a popular love song from the early nineties, "Sometimes love just ain't enough."

This book had me tearing up within the first two chapters and then again when Ember read the letter her father left for her. I loved reading about Ember's family and how they were trying to deal with the unimaginable loss of the head of their household in different ways. Then there's the love story aspect and that was just...goodness, I'm actually smiling like a loon while typing this, remembering what happened between Josh and Ember. What they had just felt like it was meant to be but even after the episode in the cabin, nothing was rushed or forced and that's what gave their relationship this realness. These two were just perfect for each other but they did have their struggles, helping to solidify what they had.

I can now fully understand and appreciate why Full Measures received the high ratings and glowing reviews it did earlier this year. Even though it's a new adult (NA) novel, I feel that it can be appreciated by almost any age group that reads it. This was about love for family and truly falling in love with someone for the first time. It was about self and sacrifice, putting the needs of others before your own but also being able to prioritize yourself in order to live the life that you want. It was about recognizing when something, or rather, someone is worth fighting for and setting your own fears aside to go after what or who you want. I'm giving this latest addition to my favorites list five-plus stars and highly recommend it. ♥