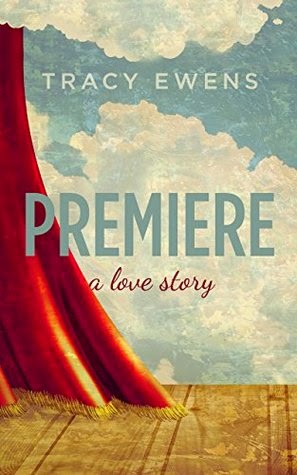 Note: This ebook was provided by the Independent Book Publishers Association via NetGalley in exchange for an honest review.

I like second chance romances. They often give readers that sense of hope, making us believe, if only from the time we begin and finish each one, that true love conquers all or that first love never truly dies. I can also appreciate books that have angst. I mean, if we're truly honest with ourselves, we all have some amount of angst in our lives and we all choose to handle it differently. Mix the two together and I'm still game. However, when there angst is off the Richter scale and there's just way too much whining and blaming and self-preservation going on, frustration starts to set in on my part. Sadly, that's what happened with Premiere: A Love Story by Tracy Ewens.

Sam Cathner and Peter Everoad were longtime best friends who eventually began to develop romantic feelings for one another. Just when she thought they would be in a committed relationship, he ups and leaves for New York, declaring that what happened between them was a mistake. She's heartbroken and it takes a long time for her to dry her tears and get on with her life. She tries making a name in show business but fails miserably. On the other hand, he becomes a famous playwright and appears to have made the right decision. When he hears the local theater in their hometown of Pasadena needs help, he offers up his latest play for production and the two meet again because she works for the theater company.

There's a LOT of drama that happens and both of them air their dirty laundry for all to see. He does it by using his life and his time with Sam and their other best friend Grady Malendar as inspiration for the play he's written and is helping to stage; she does it by freaking out and letting anyone and everyone who has ears know what a jerk Peter is. To be honest, I had no idea why these two were still so hung up one each other. While they had a couple of positive points, I wasn't really sympathetic to either of them and I couldn't muster up the enthusiasm to cheer them on while they tried to make up their mind if they wanted to pursue something romantic with one another.


There were a number of editing issues that were missed and while those weren't overly distracting, what did bother me were the numerous times that you had no idea who the heck was saying what line in the conversation. I don't know if that was an editing thing or a formatting thing but it happened way too many times, with me thinking for a split second, "Who the heck is speaking now?!" Maybe my frustration with all the back and forth between Sam and Peter was getting to me but I found myself needing to take several breaks while reading and for a book that's less than 300 pages, that's usually not a good sign on my end. There were just times that the story was dragging along and my attention began to wane.

Don't get me wrong. Premiere: A Love Story was one of those books that had potential. The idea behind it was original and there were some definite high moments that lifted the story up. The ending was actually really nice and something that, at the very least, made me feel like the time I put on was somewhat worth it. I do wish that the character of Grady were developed more as well as a few of the other supporting characters, who were thankfully not full of angst and weren't depressing to read about. I'm torn with as far as how to rate this book. I hate giving anything lower than a three-star rating to any book and since I didn't hate this particular book and was "merely" frustrated with it, I'll stick with the three stars.

Check out Premiere: A Love Story for yourselves on Amazon | Barnes & Noble.