Review: "The Bells of Times Square" by Amy Lane 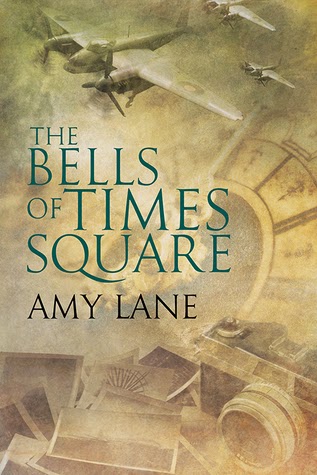 There had been no choice here. Not since the closet had revealed him. Not since Walter had licked his hand and looked Nate nakedly in the eyes, proclaiming without words, This, this is who we are. Cum-eaters, cocksuckers, ass-fuckers—you know this. We have no excuses.

The Bells of Times Square by Amy Lane is the story of two men who meet in the worst of circumstances but discover a love that they never thought they would be able to have for themselves. By the time I finished reading this book, I simply had to take a few minutes to fully absorb the impact of such a painfully beautiful love story and characters that left their indelible mark with their honesty and depth, something sorely lacking in other books.

The story begins with an old man preparing to be taken to Times Square to wait and listen for the ringing of the bells, something that he's been doing since New Year's of 1946. His grandson will be taking him there this year, the old man unable to go on his own, no thanks to the stroke he suffered. While there, the grandson introduces him to his boyfriend and the grandfather wishes he could tell his grandson how much he understands what he is feeling and going through.

The story then flashes back to several decades earlier. It is World War II and Lieutenant Nathan Meyer is a member of the air force, tasked with taking important photographs of assigned areas that are to be assessed as targets. When the plane he's on crashes, he is found to be the only survivor and rescued by Corporal Walter Phillips, a member of the army. They hole up in an abandoned house Walter has been living in since he escaped a train that was sending him and other captured soldiers to Germany.

Nate and Walter try to live within their means while trying to be wary of any members of the SS searching the area. During their time together, the two become increasingly closer and act on their attraction to one another. Soon enough, their feelings have grown into something neither has experienced before. Nate dreams of living a life with Walter after the war but Walter can't help but think that what they have will end once they're rescued or captured or are able to escape.

After relaying Nate and Walter's time together and everything that happened afterwards, Nate is once again aware that he is Times Square, still waiting for the bells to ring. There's a poignancy and ache that you can't help but feel at this point, especially after learning of everything the two men endured together and the sacrifices that were made in the process. For Nate to have kept his secret for so long makes you believe that it wasn't out of shame but out of wanting to keep that piece of his life, his Walter, just for himself.

I highly recommend The Bells of Times Square for anyone wanting to read about true love and how it endures even with the passage of time. It's a touching story, one that had me tearing up a couple of times, and with characters like Nate and Walter, you'll want them to have their happy ending, in whatever form it may come. The love these two shared never diminished and finding something like that is what countless people aspire for. I'm giving this book five-plus well-deserved stars. ♥

Pre-order The Bells of Times Square on Amazon | Barnes & Noble.