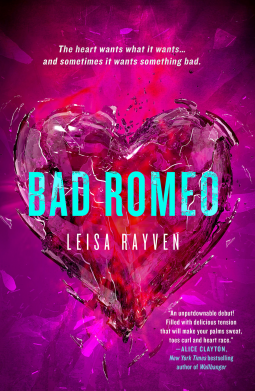 "Nothing about this scares you, does it?" he asks quietly.

I almost laugh. "Of course it does. It terrifies me. You terrify me. But not enough to make me think you won't be worth it."

His gaze is intense. "You think I'm worth it?"

He swallows. "That's the sexiest goddamn thing anyone's ever said to me."

Holy book hangover, Batman! I've had the ARC of Bad Romeo by Leisa Rayven sitting on my tablet since October 28 and as tempted as I was, I didn't want to read it until I got closer to the date I wanted to release my review. So, I waited...and waited...and waited. And yes, a blogger or two have already released their reviews but I usually wait until, at the very least, a week prior to the official publication date. Let me tell you, I've never considered myself a patient person but suffice it to say that my patience was well-rewarded this time around because this book had me stupefied with just how freakishly amazing it is! I'm pretty sure I'm going to repeat myself later in this review, and there's no doubt that my fangirling will be on full display (which I shall not apologize for), but this book needs to be pre-ordered ASAP. ♥

"You're you, and I'm me, and you were right when you said we shouldn't start something. We want totally different things, and I guess, I'm finally realizing I'm not okay with that."

Cassie Taylor and Ethan Holt have chemistry, the kind of chemistry that's palpable, making them invincible onstage but make them vulnerable offstage. When they first meet, they are merely two individuals auditioning for a spot at The Grove Institute of Creative Arts. They begrudgingly became friends but there is always something more between the two of them, regardless of the push and pull, the love and hate, the back and forth. Ethan has his reasons for holding back but it stems from his not wanting to hurt Cassie, which is ironic because there are times when he pushes her away that he does, effectually, hurt her. Still, these two can't help themselves and finally (FINALLY!) give in to what is obviously more than just physical attraction, believing they'll overcome the odds...until they don't.

"We've never been over. You know it as well as I do. Even when I was halfway around the world and you hated my guts, we weren't over."


Cassie Taylor and Ethan Holt have history, the kind of history that has changed them, one, seemingly, for the better, and the other, presumably, for the worse. After hearts are broken, they meet again, a few years later, both having established acting careers separately. They're set to work together onstage and while the chemistry is still very much there, the history they share is making it difficult for either of them to work well. Ethan has only one reason for wanting to be part of the play and it is to have another chance at Cassie, which is ironic because he had his chance once before and chose to squander it by leaving her. The hurt and anger are fueling Cassie to keep Ethan at a distance but the more time she spends with this updated version of Ethan, the more she finds it difficult to know what to believe in.

"Am I terrified of you hurting me? Of course. Probably the same way you're terrified I'll hurt you.

"But I'm brave enough to know it's absolutely worth the risk.

"Let me help you be brave."

This book has it all--humorous moments that had me either smiling or laughing, heartbreaking confessions that had my own heart squeezing in empathy, and life-changing realizations that had me wanting to grab a pair of pom-poms to cheer the characters on. Cassie's simplicity and Ethan's complexity is a juxtaposition in the flashbacks that gets turned on its head in the present because our lead characters appear to have switched places in terms of where they are emotionally. I loved the author's use of Cassie's diary entries and Ethan's emails from both the past and present because it was like getting to see what was behind the masks these two sometimes wore. Of course, cracks were already beginning to form on their facades whenever they had confrontations, the truth seeping out now and again.

They really are star-crossed lovers, but, unlike Romeo and Juliet, these two may have a chance to fulfill what looks like destiny, if only they can work through, as a favorite song of mine so aptly puts it, "the wreckage of" their "past". The fact is, Ethan created the "monster" that is now Cassie and undoing it all is not going to be as simple as him apologizing. It's seeing how they were before and how they are now that and wondering how they'll be afterwards that has me invested in the story of Cassie and Ethan. These two are simply addictive and the end of this book already has me counting the months until the sequel's release. Bad Romeo was SO frackingly good that I'm giving it a standing ovation-worthy five-plus stars and is one of my favorite reads for 2014. ABSOLUTELY HIGHLY RECOMMENDED! ♥