Review: "The Climax" by Christina George 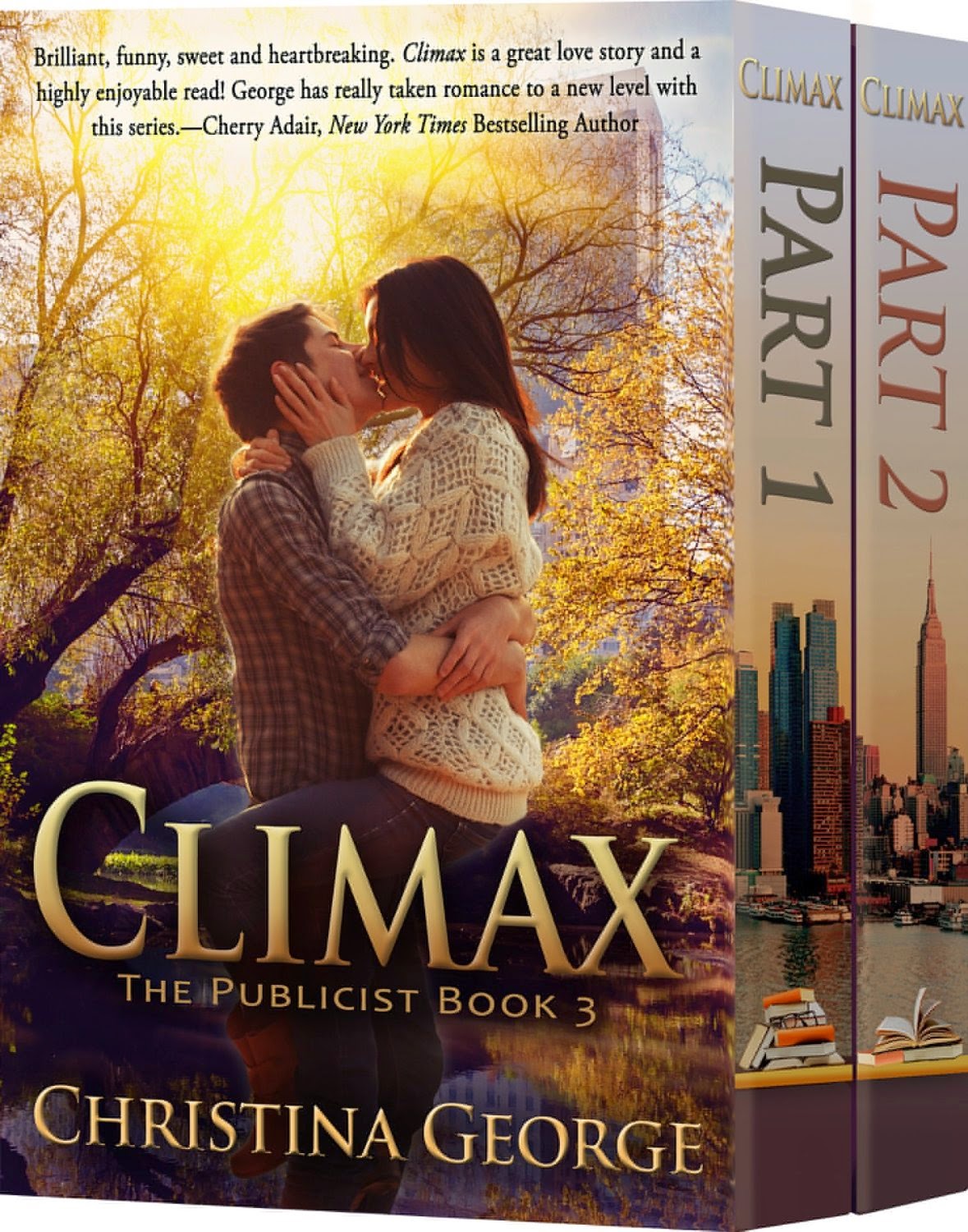 Note: This ebook was provided by Author Marketing Experts via NetGalley in exchange for an honest review.

The Climax is the third book in the Christina George-penned The Publicist series and wraps up book publicist Katherine "Kate" Mitchell's story. This picks up some time after the events of book two, Shelf Life, and we find that while the "happily" part is still in effect, the "ever after" seems to be in limbo. While everyone appears to have moved on, readers will find out that that's not necessarily true, no matter how much the main characters try to convince themselves that they have.

Kate Mitchell is on top of the world--she's engaged to MacDermott "Mac" Ellis, who professed his love and making her the only woman he divorced his wife for, and she has her own publishing house with a number of successful titles under its belt. There's no doubt that she and Mac love each other but it's a wonder that they have yet to set a date for their nuptials. Kate appears to be waiting...but for what exactly? Then, she unexpectedly bumps into Nicholas "Nick" Lavigne, the man who's heart she broke.

Nick Lavigne has moved forward with his life after his then-fianceé decided to end their engagement. He's no longer the same guy he once was, becoming more wary of falling in love and more protective of his own feelings. Being that vulnerable taught him painful lessons but he's dating someone new, opening new branches of his store, and being there for his younger sister Vivienne. Yes, life has gone on but then it goes off-kilter  again when, of all the people in New York, he bumps into Kate Mitchell, aka the ex.

Mac Ellis is ready to start a new life as a married man to Kate Mitchell. He finally did the right thing and divorced his wife and is now working side-by-side with the woman who's changed his life. But fate throws him a curve ball when he receives a frantic phone call from one of his sons informing him that their mom is extremely sick. Mac discovers she has cancer and steps in, going above and beyond to be there for her, believing he's atoning for his sins but failing to see how his choices are negatively affecting Kate.

There are a few new additions to the cast of supporting characters and I must say that I liked the inclusion of Vivienne Lavigne (aka Riley O'Connor) and Dr. Ruth Ann Wilson, Kate's therapist. These two women brought new energy to the series and provided fresh perspectives for Nick and Kate, respectively. It was great that Andrew Trapp, Grace Adler, and Lulu, whose last name I can't recall (though I don't think it was ever mentioned in any of the books) were still very much around for this third installment.

I was a little surprised with Kate's state of confusion regarding Nick and Mac, especially after she had chosen one over the other in book two. I also felt that Mac was made into somewhat of a scapegoat here but I will admit that he made some really terrible choices. The guy was stuck between a rock and a hard place and he obviously still had issues from his previous marriage that he should have dealt with before proposing to Kate. Mac Ellis: the poster child for cluelessness.

Now, regarding the whole Nick issue--Kate seemed quite sure that she loved Nick but she wasn't in love with him in book two. So, the fact that she's suddenly inundated with thoughts of him simply because she bumped into him on the streets of New York had me a bit skeptical. Still, I went with it and Ruth Ann's explanation seemed plausible, though a tad forced, just to make the whole Kate + Nick thing work out. But hey, by the time we got to Mexico, I was finally with the program. ^.^

So, was I on Team Nick or Team Mac? A little of both, I guess. Mac wasn't a bad guy. Clueless, yes, but not some heartless jackass. Nick was the perfect guy in the first two books and it was good to see him more jaded after Kate broke his heart. I was more on Team Kate because the girl simply needed to make her mind and heart up and finally get that happily ever after she wanted. In the end, I was happy with her choice though Ruth Ann's interference made me wonder why she was wary of the guy seeing Kate again.

This was an overall good series with an interesting basic plot and characters. There were a few editing boo-boos in this third book nothing too painful or overly distracting. I'll definitely miss Kate, Nick, and Mac but hopefully we'll get to see them in cameos in future releases, as mentioned by the author in her thank you note. ^.^ The Climax is a commendable book that I enjoyed reading, and with the four-star rating I'm giving it, averages the overall rating for The Publicist series to four stars. ♥

Grab a copy of The Climax on Amazon.