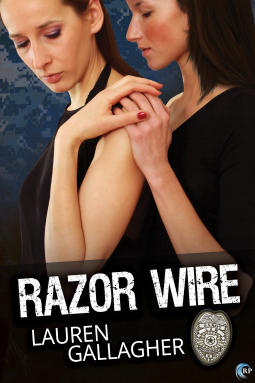 Razor Wire is the latest novel by author Lauren Gallagher and is the story of a crime that brings together two women and enables them to find solidarity, friendship, and love in the face of all the challenges before them. They're both Masters-at-Arms (MAs) who are stationed in Okinawa and while they may appear to be very different on the surface, the more time they spend together, the more they realize that they share several things in common.

MA3 Kim Lockhoff finds herself pregnant as a result of being raped by a superior officer. She's hesitant to file charges against him, knowing full well that her perceived reputation as a promiscuous woman and her rapist's position in the Navy are both points against her. The only other person she even considers telling is MA2 Marion and she's skeptical about her accusation against their superior, proving Kim's assumption that the others will never believe the sex wasn't consensual.

MA2 Reese Marion sees MA3 Lockhoff as nothing more than another floozy who hops from one bed to another, desperately climbing the ranks in the Navy. Reese has no respect or patience for women like that but when their lead petty officer, who also happens to be her close friend, asks her to provide Kim some support, she has no choice but to do so. Reese soon realizes that her first impression of Kim was totally wrong and becomes her much needed ally.

After the initial apprehension between the two of them, Kim and Reese are able to establish trust and discover that they are more similar than they first thought. Reese fully understands what Kim is going through and wants to give her the support that she needs. As Kim is faced with one difficult choice after another, Reese is there for her. What starts as a friendship quickly develops into something more but will their closeness give Kim's rapist the ammunition he needs to get what he wants?

I liked that the focus of the story was on the dilemma that Kim was facing and how something as simple as the faith of one person gave her the courage that she needed to finally take on the man who forced himself on her and continued to exert his power and authority over her. The development of the relationship between Kim and Reese was a process and not the insta-love or insta-lust that often occurs. These were two strong women who had depth and weren't merely two lesbians who got together.

Razor Wire is a well-written novel about a volatile yet thought-provoking subject. There were several interesting points that were brought up in the story and I found myself contemplating what I would do in the same situation and analyzed my own personal feelings towards the pros and cons that Kim was weighing. This was more than just about right versus wrong and sheds a necessary light on the plight of women like Kim and Reese and their circumstances. This gets five stars from me! ♥