Review: "More Than Music" by Elizabeth Briggs (Chasing the Dream #1) 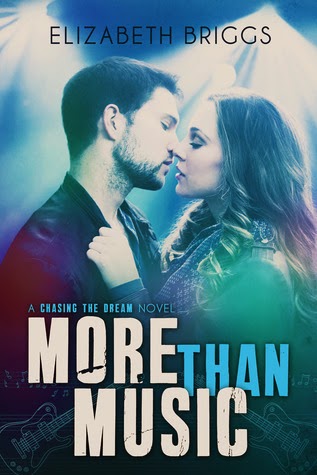 More Than Music is the first full-length novel in the Chasing the Dream series by Elizabeth Briggs. This book follows Villain Complex, a rock band composed of Jared Cross, lead singer and guitarist turned bassist, Kyle Cross, keyboardist, Hector Fernandez, drums, and Maddie Taylor, guitarist, as they join a TV reality competition show entitled The Sound, which is similar to the actual TV hit The Voice. I read the prequel, More Than Exes, prior to this one so I was familiar with the dynamic within the band and how Maddie noticed Jared from the first time she saw him.

Maddie Taylor is a talented musician, excelling in school and preparing for her internship with the LA Philharmonic. Playing the piano is her forte but she's secretly been playing the guitar for years. When she's offered to replace the bassist of Villain Complex in preparation for their audition on The Sound, she's hesitant but decides to help the band out. After all, it's only a one-time thing and it was difficult to say "no" to one very hot Jared Cross asking for her help while appealing to the geek in her with his Star Wars reference. And then the one-time gig turns out to be more long-term than she expected...

Jared Cross may be known as somewhat of a player, what with women fawning over him and offering themselves up to be his bed mate for the night, but his true loves are his band and the music they play. He believes being on The Sound will provide them with the exposure they need to really hit it big and the addition of Maddie Taylor seems like a perfect fit. He's already been warned off by Kyle and Hector about getting involved with Maddie but no matter how hard he tries to keep things platonic, he can't resist crossing the line and falling for the girl who seems to be in perfect harmony with him.

With warnings from the other members of the band and their mentor on the show, Jared and Maddie realize that staying away from one another is what is best for the band. When they finally give in to their feelings, they decide to keep their relationship a secret, but with Jared's playboy image very much in the spotlight, Maddie's finding it difficult to pretend she isn't affected by all the women flirting with Jared while he gives them his patented killer smile. She knows he isn't interested in them and while she wants some sort of public acknowledgment, is she ready to sacrifice the band's dream of making it big?

I really liked this book and felt that it provided some originality and creativity to the whole rock star romance genre. The characters were more than what they appeared to be and the story surprised me more than once and in a totally good way. I enjoyed the competition among the other acts on The Sound and the addition of Dan Dorian as the band's mentor was a good one. Jared and Maddie were fun as a couple and had that combo of cool and nerdy wrapped in a oh-so-in-love-with-one-another package. More Than Music had me smiling in satisfaction and it gets four stars! ♥

Grab a copy of More Than Music on Amazon | Barnes & Noble | Kobo.