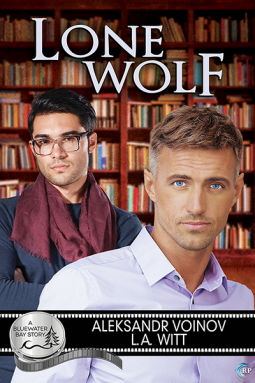 Lone Wolf by Aleksandr Voinov and L.A. Witt is the fourth novel in the multi-authored Bluewater Bay series and I thoroughly enjoyed this latest installment. Book four spotlights two men who also happen to be gifted writers, one with an already established name and following and one who moonlights as a fan fiction author. They start off as two usernames, "Wolf Hunter" and "Lone Wolf", on a forum dedicated to Wolf's Landing but establish a friendship over two years. When Wolf Hunter suggests they meet to discuss Lone Wolf's fan fiction, circumstances for and between the two begin to change.

Hunter Easton is a former career military man turned bestselling author, thanks to his widely popular Wolf's Landing book series that has been turned into an equally successful television series filmed in his town of Bluewater Bay, Washington. People can't get enough of his books and the demand for book eight to be released is high. Unfortunately, Hunter is having difficulty finishing it, no thanks to an old-fashioned case of writer's block. An online friend shares his Wolf's Landing fan fiction with him and Hunter is pleasantly surprised by how fantastic it is, believing it could be just what the series needs.

Kevin Hussein is an IT specialist but his true passion is writing and he's always been able to do that by writing Wolf's Landing fan fiction during his free time. Usually limited to short stories and snippets, Kevin's finally able to put together novel-length fan fiction and shares it with his closest friend who just happens to be someone he met online on a forum they both hang out at. Little does he realize that the "Wolf Hunter" his "Lone Wolf" has been friends with is none other than his literary idol and writer of the Wolf's Landing series of books--Hunter Easton.

Kevin's life begins to undergo developments he would never have dreamed of but the reality of it all starts to take its toll on him and he desperately looks to Hunter for guidance. Hunter tries his best to provide Kevin the support that he needs as his professional life shifts from one industry to a completely different one, but Kevin sees it as Hunter pushing him away and begins to wonder what Hunter's true motivations are. On the other hand, Hunter is used to being protective of his space and solitude but is that more important than Kevin filling a void he never realized existed?

Both Hunter and Kevin love writing but we find them at two different points in their writing careers: Hunter has achieved success and status but is already faced with writer's block while Kevin is just about to make it big but is already overwhelmed by the demands being put on him by suddenly becoming a very public figure. I liked that the story wasn't about Hunter taking advantage of Kevin's talent. It allowed the book to take the story on a more original and creative angle and didn't rely on what would be considered the more common tangent.

They had a what I'm assuming is about a twenty-year age difference but, aside from some kidding around, it wasn't really a factor in their relationship, which was nice since that's usually an issue in other books. This latest book in what's already an interesting series definitely raised the heat level but it wasn't just about the sex because the characters and story are more than enough to keep your attention from start to finish. If you haven't read any of the books in the series, they can all be read as standalones, though there's definitely no harm in reading them in order. ^.^ Lone Wolf gets five stars! ♥