Review: "The Deep of the Sound" by Amy Lane (Bluewater Bay #8) 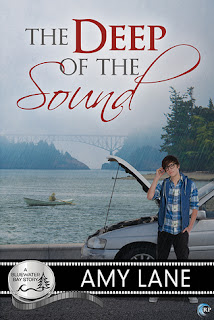 Cal could get used to not fighting for his life anymore.

That was the only thought that propelled him up to get back in the water.

Avery Kennedy has had enough of the little digs his boyfriend gets in whenever they try to have some sort of mature conversation. You would think that Avery being the higher money earner between the two of them would garner him some amount of respect, but no. Then you’ve got his parents who still seem to be wishfully thinking and hoping that Avery will snap out of his gayness and settle down with a nice girl one of these days. So, when he decides to pack up his stuff and leave his now-ex-boyfriend, his delusional parents, and overly sunny SoCal behind, he knows exactly where he wants to start over—Bluewater Bay, Washington.

Cal McCorkle used to have a future, one that involved going to college and getting a degree. All that changed after his parents were killed in a car accident, leaving him responsible for his younger brother Keir and his great uncle Nascha. Keir’s behavioral issues and Nascha’s Alzheimer’s require them to have regular medication, adding on to the burden of trying to earn enough money for their everyday needs and paying the mortgage and monthly bills. Helping Avery off the side of the road opened the door to something neither of them expected but while Cal can only offer “until we can’t,” with Avery, he can’t help but wish for more.

I fell in love with the multi-authored Bluewater Bay series right from the get-go and with each new book that’s become part of this all-time favorite, I can’t help but wish that it’ll never come to an end. While every single book has made me smile and owns a piece of my heart, there’s something about Amy Lane’s The Deep of the Sound, book number eight, that just went above and beyond all my expectations. This book made me laugh and it made me teary-eyed because it wasn’t simply about lead characters Cal McCorkle and Avery Kennedy falling for one another; this was about family, though more of Cal’s than Avery’s, and how vital a role they play in our lives, whether in a good way or not. Cal’s love for his family made him change the course of his life, until everything centered on being able to provide for them, even if it meant having little left over for himself. On the other hand, Avery quickly found out that family isn’t always the one you’re born into, but the one you’re able to create for yourself, surrounded by love, acceptance, support, and respect.

Cal and Avery were two men who equally captured my heart, a rarity since I usually end up liking one lead character more than the other, regardless of the degree. Cal was drowning in hopelessness, suffocating him but caught between a rock and a hard place because of his love and devotion to Keir and Nascha superseding whatever love he had for himself. Then you’ve got Avery who, in spite of the kind of family he had and having spent more time than he should have with his ex, remained buoyant with the hope that seemed to seep out of him every single day. These two seemed to have been made for each other, and I really liked the supportive group of people they had around them, with a special mention to Nascha, whose own story came full circle here after beginning in the Lights, Camera, Cupid anthology. Amy Lane always seems to be able to write stories that are both heartrending and hopeful, but The Deep of the Sound is in a class of its own. I’m highly recommending this as a standalone and the Bluewater Bay series as a whole. Five-plus stars! ♥

Purchase The Deep of the Sound on Riptide Publishing | Amazon | B&N | Kobo.