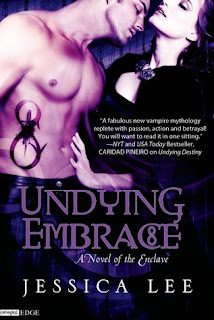 After being betrayed by his partner and friend, Arran MacLain walked away from the Enclave, needing to make the vampire he trusted pay for what he did to their group of warriors. When he gets to a club owned by Marguerite Devonshire, the ancient vampire that lured his former partner and turned him into a traitor, he's surprised to find Gabrielle Stevens, the human working with the Enclave. Arran has tried to keep a respectable distance from Gabrielle, knowing he doesn't deserve someone like her.

Gabrielle needs to find her younger sister and not even Arran can stop her. After agreeing to work together, they soon realize who's taken Gabrielle's sister and how dire her situation has become. Calling in the rest of the Enclave may be their only chance to rescue Gabrielle's sister, but when Gabrielle herself is caught in the crossfire between former allies, Arran desire for revenge is overridden by his desperation to save the only woman who owns his heart and the only one he wants to share eternity with.

Undying Embrace is the second novel in the Jessica Lee-penned The Enclave series and picks up a couple of years after the events in the first novel. Arran MacLain left the Enclave to seek his own revenge on his former partner Markus Santini, who turned his back on his fellow warriors after being manipulated by Marguerite Devonshire, who he now serves as her commander. Arran has always had feelings for Gabrielle Stevens, who is on the search for her missing sister Alexandria, but he doesn't see himself as worthy of her, even though the feelings are very much mutual and Elle would love nothing more than for both of them to finally pursue something other than a working relationship. She also has the love of Logan (whose last name was never mentioned in the first or second books), another Enclave warrior and someone who has never hidden his dislike for Arran.

There were a number of things that came into play in this second book--Arran and Elle's love story, Markus's transformation, and the Enclave's ongoing mission against Marguerite and her minions. Everything tied together quite smoothly and there were certainly a few surprises that made the story even better than I would have expected (and my expectations were high). I liked Arran and Elle together, but my heart did break for Logan, especially near the end of the book. The whole thing with Markus was, well, frustratingly good because he's a character that still shows glimpses of the vampire he was prior to Marguerite sinking her claws (and fangs) into him, especially when it came to Alex, but there's no doubt that he's also become such a cold-blooded bastard so even though it's so easy to hate him, there are still lingering feelings of hope for the former warrior.

The Enclave is an irresistibly addictive paranormal romance series, one that will have you needing the next fix as soon as you've consumed the one before it. The characters are complex and there's certainly nothing ideal or perfect about them. There's nothing about Arran and Elle's story that makes it similar to that of Kenric St. James and Emily Ross's from book one, other than Elle and Emily were human. Yet, even with the different love stories, the tale of the Enclave and the cause they fight for is still very much there, along with Marguerite. However, there is a cliffhanger of sorts, one that involves an unexpected twist that had me all excited. And yes, as soon as I was done with book two, I went on to book three because there are just some things that can't come between me and the Enclave (like sleep). ^.^ I loved Undying Embrace and give it five stars. ♥