Review: Turning It On by Elizabeth Harmon (Red Hot Russians #2) 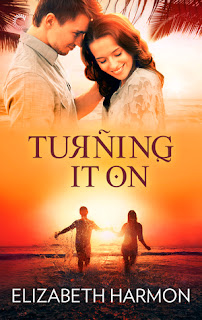 Hannah Levinson is engaged to be married and all seems right in her world. That is, until her fiancé suggests that they join a reality TV show calling Last Fling that one of their best friends created and is co-producing. Hannah is more than hesitant but gives in to what her fiancé wants, believing that their relationship is far too solid to be rocked by the temptation of sleeping with someone else, even if there will be several people available for both of them to choose from, with the winner receiving a cash prize as well.

When they get to Puerto Rico to shoot the show, it soon becomes obvious that Hannah's relationship isn't as strong as she originally thought. Her fiancé is more interested in spending time with one particular potential last fling on the show and manipulative editing has her looking like the bad guy. The one bright spot is her unlikely friendship with the Vladimir Shustov, a former ice dancer turned male stripper who just happens to be a possible last fling as well. Hannah needs to fight, but fight for whom is the question.

Turning It On by Elizabeth Harmon is the second book in the Red Hot Russians series and is about book editor Hannah Levinson and male stripper Vladimir Shustov. I adored the first book, Pairing Off, where Vlad was introduced in as the teenage nephew of Ivan Shustov, coach to lead characters Anton Belikov and Carrie Parker, and had recently quit as an ice dancer. The gap between the two books must be more than five years since Vlad was still a teen in book one and is twenty-five, the same age as Hannah, in book two.

Almost anyone who eagerly joins a show like Last Fling is after something--whether it be fame, fortune, or an actual fling--and I do think that it was a tad delusional on Hannah's part to think everything was going to be a-okay between her and her jackass of a fiancé. Yes, I get that she thought they were a strong and stable couple, but when temptation is offered up the way it was here, it's bound to break one or both people in the relationship. Maybe that's me being cynical, but Hannah obviously didn't know the man she was going to marry as much as she thought she did, which is more proof that their relationship had issues.

Suspending disbelief when it came to the show is one thing, but there was a lot going on, some of which had nothing to do with Hannah and Vlad. Instead of focusing all that attention on Eric Conrad, the show's co-producer and creator and friend to Hannah and her boyfriend, and Alison Michaels, a former teen star and now contestant, Hannah and Vlad's friendship and romance could have been delved into more. Having Cody DeWylde, Carrie Parker's ex-figure skating partner and now the co-producer and host of Last Fling, around was both irritating and distracting, the former being more acceptable than the latter since having characters you dislike is one thing, but giving them too much of the spotlight in a story makes no sense.

I went into Turning It On with such hope because of how I felt about Pairing Off, but I found myself somewhat disappointed. Even the synopsis had me thinking one thing--Vlad would be seducing Hannah in order to win the prize money at the end of the show--only to realize that the show they were one was not just manipulative but overly complicated. I wish everything had been kept more simple and the main focus remained on Hannah's changing relationship with her fiancé and her developing friendship with Vlad. I feel bad because I really wanted to fall in love with the story and characters like I did with the first book, but while I did like Vladimir Shustov, the rest was lacking. :( I'm giving Turning It On 3.5 stars out of five. ♥

Pre-order Turning It On on Amazon | B&N | Kobo.