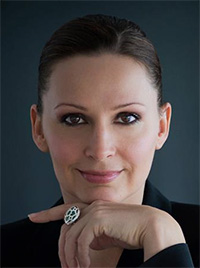 As part of the release of Koven, the first in a brand new paranormal series, author Vanessa Skye has graciously taken the time to answer a few questions to give us insight on her new book, which I happily read and gave a five-starred review to recently. ^.^

A Q&A with Vanessa Skye

1. What was your inspiration behind Koven?

I wanted to write a book about a kick-ass female assassin and while my main character, Berg, in the Edge of Darkness series is admittedly pretty kick-ass, she doesn’t wield twin swords, a ‘la River from FireFly! I’ve also absolutely loved vampires since I read Interview With The Vampire by Anne Rice back in the nineties, so writing Koven was just pure fun for me.

2. How is this book different from your Edge of Darkness series?

Edge of Darkness is crime fiction in all its gritty reality, with all the associated research, emotion and basis in reality that goes along with it. Koven is a paranormal romance and is mostly just fun and imagination. There are also some similarities, both series contain a strong female lead working through their demons to find redemption, and I have included a vampire mythology that required research on both Druid and Vikings, so research-wise there was a similarity, even if the subjects are nothing alike!

3. Will this new series feature standalone novels or interconnected stories and characters?

I intend for Koven to the be the first in a series, but they won’t always be from Striker or Celeste’s perspectives. I have a whole coven of hunky vampires to play with! I am working on the storyline for the second book now and I hope to have written it by the end of the year.

4. If you could cast Celeste and Striker, who would you choose and why?

My fantasy cast would be Jason Momoa for Striker and Christina Hendricks for Celeste. Oh, the sexy.

5. What advice would you give aspiring writers?

To never give up. To keep believing in yourself. To laugh in the face of rejection, and to keep going. And to get a good editor, because nobody anywhere wants to read your first draft of anything.

Thank you again to Vanessa Skye for answering my questions and to Cindy Bidwell of The Writers Coffee Shop for facilitating the interview! ♥

Koven will be released in eBook and paperback on June 11, so check out Amazon, Kobo, Barnes & Noble, and TWCS, or ask your local book store to order it for you.

Check out Koven on Goodreads, or find out more about Vanessa Skye’s crime fiction Edge of Darkness series on her website.

To celebrate the release of Koven, Vanessa’s debut crime fiction novel, The Enemy Inside, is only US$0.99 for the month of June 2015! Get it here!