Review: Yours Truly, Taddy by Avery Aster (The Undergrad Years #2) 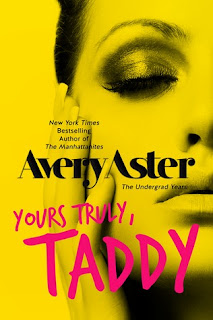 Not only does she have absentee parents, Tabitha Adelaide "Taddy" Brill has just discovered that they've failed to pay her college tuition. When her BFF's mom recommends her to one of the top modeling agencies, Taddy finds herself on a plane with her friends and three very hot Frenchmen, on their way to sunny Martinique for a photo shoot. But a rip on the plane's ceiling sends them plunging toward the ocean and just as she's about to be pulled out of the plane by the force of wind, she feels someone grab her ankle.

When Taddy awakens, she's floating on a piece of debris from the plane along with Leon Lartique, the set and lighting designer on the shoot. They buoy each other's spirits in order to stay afloat and decide to swim their way to the island of Eden. Both Taddy and Leon have experienced life-changing events soon after their paths crossed, but will they be able to make it back to civilization and find the friends they hold closest to them and what will happen once Taddy finds out the secret that Leon never confessed to her?

Yours Truly, Taddy is the second novella in the Avery Aster-penned series The Undergrad Years, a prequel series to the author's The Manhattanites series, wherein Taddy Brill's story as an adult is told in Unscrupulous. This novella is also part of the multi-authored Invitation to Eden series but can be read as a standalone in either case. You can expect the same snarky humor that Taddy and her set of friends, Lex Easton, Blake Morgan, and Vive Farnworth, are known for, especially when all four get together, but there's also a fair bit of drama here when Taddy and Leon Lartique are left to their own devices to survive.

Among the four adult Manhattanites, Taddy was my favorite, though I don't really know too much about Blake and Vive since their own stories are still future releases, and now, Taddy is still my favorite among the four teenage Manhattanites. She's as smart as she is beautiful and she's very loyal to her three best friends. Her life hasn't been an easy one, what with estranged parents who appear to have no interest whatsoever in their daughter's life, but she does what's necessary in order to go after what she wants. She also comes off as a bit more unconventional and independent compared to the three other Manhattanites.

If you've read the first two books in The Undergrad Years series, I recommend you check out Lex's and Taddy's stories in the first two books in The Manhattanites series, respectively. Each one is a standalone but read the books in order anyway because they're fun, steamy (VERY steamy), and entertaining. With a tad of drama, some humor, and a fair amount of sex, Yours Truly, Taddy was enjoyable enough to keep my attention from start to finish, allowing me to get through the book in one sitting. It's a quick read that may be exactly what you're looking for this weekend. I'm giving this second book in the series four stars. ♥

Download Yours Truly, Taddy for free on Amazon | B&N | Kobo.