Review: Behind the Scenes by Dahlia Adler (Daylight Falls #1) 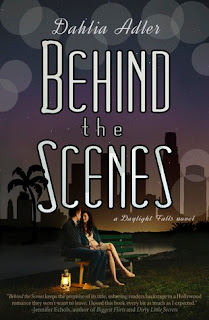 Ally Duncan's dream of attending Columbia University may not as sure of a thing as she once thought. Her father has stage four melanoma and his treatments are expensive, requiring his parents to dip into Ally's college fund. Learning about her dilemma, Ally's best friend, Hollywood teen actress Vanessa Park, asks her to be her personal assistant, requiring Ally to be on the set of Vanessa's new TV drama called Daylight Falls. One of the perks is meeting Vanessa's co-star, teen heartthrob Liam Holloway, who turns out to be a very real guy who seems as interested in Ally as she is in him. But will Ally's burgeoning romance with Liam and her lifelong friendship with Vanessa survive a publicity stunt requiring Liam and Vanessa to "date"?

Behind the Scenes is the first novel in the Daylight Falls series by Dahlia Adler and is a young adult (YA) romance about a regular high school senior named Ally Duncan who falls in love with a nineteen-year-old actor named Liam Holloway while she works as her best friend, and Liam's co-star, Vanessa Park's assistant on a new teen drama series. Ally and Vanessa's friendship is the real thing, having started when they were mere toddlers, and the two girls refuse to let anything or anyone get in the way of it, not even Vanessa's rising star in Hollywood.

As close as the girls are, Ally doesn't immediately share the fact that she and Liam are a couple. When Vanessa's publicist comes up with a plan to drum up more press and interest for the upcoming series, one that would mean Liam and Vanessa would have to be a couple on and off the screen, though just for pretend for the latter, what was supposed to be simple soon becomes overly complicated, leading Ally to risk her relationships with two of the most important people in her life.

This was a really cute, lighthearted story that had a fair amount of drama and humor in it. Most of the characters are teenagers, with the three most pivotal having heightened maturity levels, due in large part to their circumstances--Ally with her father's medical condition and Liam and Vanessa with their careers as actors. There are a few squee-worthy moments between Ally and Liam because who hasn't been a teen fantasizing about being with the hot actor they moon over? Liam is an immensely likable male lead and it's due in large part to his being a guy who hasn't had the easiest life and does what he has to in order to have a better one now that he's older.

One of my favorite characters in the book has to be Josh Chester, Liam's best friend and another Hollywood teen celebrity. The guy may come off as someone who cares more about partying and sleeping around but he's highly observant and notices more than other people give him credit for. He's somewhat of a jackass but he's a jackass with heart and tells it like it is because it needs to be said, not because he's out to hurt someone's feelings. He's a supporting character that steals the show every time he makes an appearance.

This book has a lot of the things I look for in a YA book: interesting and easy-to-like characters, a story that brings a smile to my face, and a-ha moments for the hero or heroine that readers can recognize without having to be spoon-fed. Sometimes, you simply need a fun book to curl up with for a few hours, something that isn't overly angsty or riddled with stuff that you can't relate to. The author made me care about what was going to happen with Ally and Liam's love story, as well as Ally and Vanessa's friendship, and whether Ally's dad was going to be okay or not. Behind the Scenes was a pleasantly surprising read and one that I enjoyed from start to finish. It gets 4.5 stars. ♥

Purchase Behind the Scenes on Amazon | B&N | Kobo.