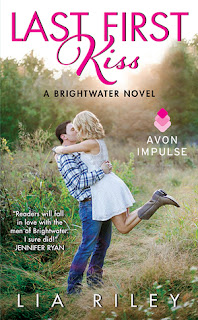 
After getting her heart broken by the only boy who looked at her like she mattered, Annabelle "Annie" Carson left her hometown of Brightwater, California right after high school graduation. A decade, a divorce, and a five-year-old son named Atticus later, Annie finds herself back at Brightwater. She's preparing their family home, the Five Diamonds Farm, to be sold, and then she's off to San Francisco to live closer to her older sister while continuing to regale the followers of her mommy blog. She's got the perfect plan for her life, but what she didn't plan on was how to not fall all over again for Sawyer Kane.

It's been ten years since he last saw her, but Sawyer knows right away that Annie is still the only girl who's ever owned his entire heart. He sees her return as his second chance to show her just how much he's missed her and how much she's always meant to him, but the knowledge that she's only in town temporarily forces him to work faster at winning her heart. With the generations-long feud between the Kanes and the Carsons and their own personal history to deal with, Sawyer knows they've got a lot against them, but he already let her get away once and now he wants and Atticus to stay by his side forever.

Last First Kiss is the first novel in the Brightwater series, a contemporary romance series set in the fictional town by the same name, by Lia Riley. This is the first Lia Riley book that I've read and I found myself quite charmed by the story of two people who were once each other's best friend, both harboring feelings of something more, and on the night that Annie Carson thought she would finally get her first kiss from Sawyer Kane, she ends up publicly ridiculed and thinking that Sawyer was in on it all along. She leaves town but returns ten years later, with her a mommy blogger and Sawyer now Brightwater's sheriff.

Life obviously went on for both of them--she was married and he was engaged--but neither of them can really deny that they've thought about each other over the years, wondering what the other may be doing. I liked that neither of them were pining away for each other, giving the story a more authentic feel to it. When they meet again, they're both single and there's an attraction, but thankfully, it never feels as if they're making up for last time, which tends to make things go fast forward without much preamble. Annie and Sawyer's love story, a friends to lovers cum second chance romance mix, was realistically paced.

The drafts of Annie's blog entries are always interesting, because it gives a glimpse of the kind of life Annie is trying to present to her followers and the actual life that she leads. It's not as if she's intentionally trying to mislead them; more of her wanting to share the positive and not bog everyone down with the negative aspects of her life. It was pretty much a no-brainer figuring out who her hater was on the blog, and to be honest, I never quite liked that individual all throughout the story especially since they came off as being a bully and tyrant. Annie's handling of the situation in that final chapter before the epilogue was priceless!

Aside from Annie and Sawyer's story, this first in a series introduces other characters to readers as well as lets us get to know the dynamics involved in a town like Brightwater, California. I'm going to go ahead and assume (always a dangerous thing) that aside from the shared setting, the series is about the Kane brothers. The second book is about Sawyer's younger brother, Archer, and I shall hazard a guess that book three is about their oldest brother, Wilder. Since Archer's story is with Edie, I can't help but wonder if Wilder's will be with Annie's older sister Claire. But hey, I'm just the reader and whatever Lia Riley offers up will definitely be on my to-be-read list. ^.^ I adored Last First Kiss and give 4.5 stars out of five. ♥