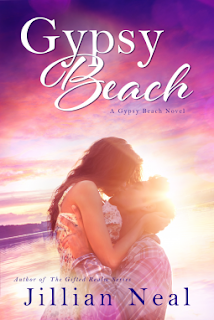 
Ryan McNamara and Sienna Cooper fell in love at fifteen only to end up separated at seventeen, with broken hearts and broken promises to keep them company for the next ten years. Now separated and desperately needing to show that he deserves to have full custody of his four-year-old daughter, Ryan returns to Gypsy Beach, the one place that gives him hope and solace--the place where he and Sienna fell in love all those summers ago.

With her beloved grandmother leaving the Gypsy Inn in her name, Sienna wants to be able to bring it back to its former glory and make it a place guests will want to go to. She needs help with the repairs and when that help comes in the form of the man who disappeared on her and left her waiting along the beach they both loved, Sienna is determined to keep things friendly but distant. But love and fate, and maybe a bit of gypsy magic, have other plans.

Gypsy Beach by Jillian Neal is the first novel in the series by the same name and is a second chance romance about two people whose love for each other never truly ended and who learn all about forgiveness and redemption and that loving and accepting someone, regardless of their present circumstances, may just lead them to the happily-ever-after they've always deserved and wanted. Ryan McNamara and Sienna Cooper were teenagers in love, but because of the involvement of his parents and later her own well-meaning grandmother, that love was put on hold. They went their separate lives, neither of which went according to the plans they set out for themselves as individuals or as a couple. Now, a decade later, they need to make peace with the past and accept the present if they even hope to have a future with one another.

I'm a sucker for second chance romances but I did feel that Ryan and Sienna getting back together was on warp speed. I get that they both still had feelings for each other, but they were also different people, having been changed by their own personal experiences while apart. I would have wanted things to progress at a more realistic pace, but I will say that even with their reconciliation, they had a heck of a lot of trying times thrown their way. There were moments that even I felt overwhelmed with the stuff they were juggling with--his estranged wife, the daughter he missed, her abusive past, the inn--and you can't help but want them to take a step back to re-assess, because that's a natural thing for people to do. But these two made the decision to fight their battles together, and in a cynical world like ours, it's nice to have imagine that something like that is indeed possible. Sienna could have easily abandoned Ryan, the way she felt he abandoned her when they were teenagers, but she's like this beacon of hope and fortitude and she was certainly what he needed.

Aside from my issue with what I felt was the unrealistic speed in which these two got back together and wanting them to truly delve into what ended their young relationship instead of it getting glossed over, I did enjoy the overall story and both Sienna and Ryan were likable characters. The one secondary character who definitely caught my attention was John Rowan, and I think it has a lot to do with my agreeing with his general assessment of things. I know the second book will be about him and I've already lined up to become part of the blog tour because I want to find out more about his story. There's definitely more to him than being a no-nonsense lawyer or Ryan's protective best friend and there's a glimpse of one additional layer when he's with his goddaughter and Ryan's daughter Evie Grace. All in all, Gypsy Beach was a good read. Four stars! ♥