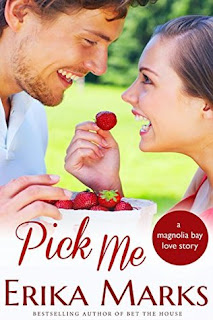 Instead of being on the receiving end of a marriage proposal from her boyfriend of three years, Thea Dunn finds herself without a boyfriend after getting dumped without much of a warning and without a home when she's forced to move elsewhere while her home undergoes fumigation after termites were discovered. Moving into a condo back home in Magnolia Bay is very temporary but it does allow her to take a break from her work as a lawyer and re-think where she is in her life. When she discovers that her neighbor is none other than Calder Frye, the guy every girl wanted to be with back in high school and the one she shared one memorable (and non-sexual) night with, Thea decides it's time for a bit of a reunion.

Calder has never forgotten Thea or that night during their senior prom fourteen years ago, and seeing her back in Magnolia Bay makes him sit up and take notice that she's still as beautiful as ever. But when he left Magnolia Bay to go to college, then medical school, and now as a doctor, Calder has never stayed in one place permanently. His return to his hometown is partly to help his family out, what with his father being an alcoholic and Calder's brother and sister-in-law left to handle their family-owned farm. He and Thea try to keep things between them platonic but there's no denying that the attraction that was there that one night they were together is still very much alive. Will they be able to stay around long enough for more?

Pick Me is the second book in the Loveless & Dunn series by bestselling author Erika Marks and turns the spotlight on the eldest Dunn daughter, Thea, and the quiet rebel she never quite forget from high school, Calder Frye. The story begins with a flashback to set the scene on why that one night together was so memorable for both of them, and then we fast forward fourteen years later to their unexpected reunion as neighbors. I read all three currently available books in the series, not including the two spin-offs, and I must say that Thea and Calder's love story was, hands down, my favorite. I liked these two together and their story had a mix of second chance romance and friends to lovers in it, two of my favorite themes in the romance genre. Throw in a bit of family drama and self-discovery and I was one very happy camper.

Both Thea and Calder were strong lead characters but both showed a fair amount of sensitivity and vulnerability, making even more likable than they already were. They both loved their jobs and cared a great deal for their families and their time together helped them to find the courage to face certain life choices that needed to be made. Theirs was a slow burn but I loved how they worked up to it and that everything about and between them felt natural. There were light and funny moments as well as more thoughtful and deeper interactions. These two had me squeeing a time or two and many of us can relate to jumping at the chance to be with the guy they had a crush on in high school. Have I said how much I loved this book? I haven't? Well, I loved Pick Me and I loved Thea and Calder. I'm gladly rating this five stars. ♥