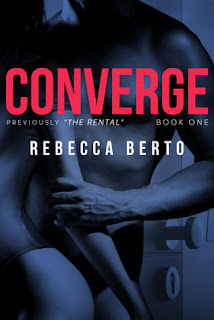 Rick Delaney is back and his presence makes Vee Wyland sit up and take notice, but then that's how it's always been when it comes to the guy she fell in love with, only to have him suddenly disappear without her being able to tell him how she feels. There's a connection between the two of them that seems to have gotten more intense over time, a connection she never shared with Rick's younger brother and her current boyfriend, Justin.

After a couple of major upheavals in her life, Vee finds herself working more than one job, trying to help her mother with the bills at home. When she follows Rick and discovers that he works for The Rental, she's offered an opportunity to work with them as well, an idea Rick isn't too thrilled about. The money may sound good but there is an anti-fraternization policy at The Rental, making things between Rick and Vee more complicated.

Converge is the first full-length book in The Rental series by Rebecca Berto and picks up after about two years from the events in the prequel. Here, we find out why Rick had to leave for London at the end of Masquerade and what he intends to do with his feelings for Vee now that they're a bit older but with her being involved with Justin. May I just point out that I didn't like Justin in the prequel and I certainly liked him even less here. The guy simply had no redeeming qualities whatsoever.

The Rental is an interesting concept in the story because it changes Rick's and Vee's lives in both good and bad ways. It was a bit difficult to believe the willingness of Vee to do what she did while working for them and how things progressed so quickly with her sexual awakening of sorts. There were a few moments of sweetness between Rick and Vee, so it wasn't exclusively all about sex between the two of them. The situation with their own families was strange, because it was as if Justin was there at the beginning, then disappeared for almost the entire book, only to reappear close to the end, plus Vee's mom's opinion of Rick and his involvement with Vee made a hundred and eighty-degree turn after having him in her house one time.

Overall, the story was pretty good, though it did require some suspension of disbelief on my part at times, and the characters were interesting. This is the second edition, the previous one having been released in 2014 and then-titled The Rental. I was never able to read that edition so I can't really compare, though the author has said that this second edition has been updated and contains new material. I would have wanted to be more invested in either or both Rick and Vee, enough so that I'll be itching to read the sequel. I'm going to give Converge 3.5 stars out of five. ♥