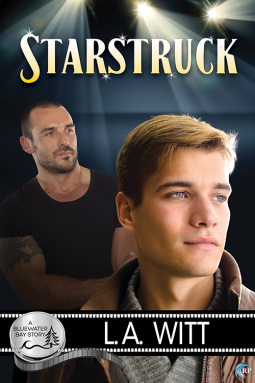 I never learn. It's not as if every book I start in the wee hours of the morning has me staying up 'til I've finished it three or so hours later, depending on the number of pages. Still, it's happened enough times that I should know that any time past midnight is NOT a good time for me to start reading a new book. If it's REALLY good, I'll get sucked in by the story and characters and sleep is forgotten until I get to the end. I'll usually have a stupid smile on my face and then realize that my beloved dog Oliver is awake and giving me his you-haven't-even-gone-to-sleep-yet-have-you look.

And that, my fellow bookaholics is exactly what happened when I decided to read Starstruck at past three in the morning and finished when the sun was up and the birds were chirping away...and yes, Oliver had that look. Starstruck by L.A. Witt is the first book in the multi-authored Bluewater Bay series that focuses on the cast and crew of a highly successful television series called Wolf's Landing and the townspeople of Bluewater Bay, Washington, the area where the show is shot. The TV series is based on a bestselling series of books by writer Hunter Easton, who will also have his own story in book four.

Levi Pritchard left the glitz and glamour of Hollywood for the peace and quiet of Bluewater Bay, Washington. He was a successful action star with a movie franchise that has made it possible for him to live a comfortable life away from the spotlight. When he receives an offer to play an important character on the much talked about television series Wolf's Landing, a role that he knows is perfect for him and will show that he's more than the musclebound action hero he played on the big screen, it takes a while for him to agree but he's aware that he would have to be stupid to refuse such an opportunity.

Carter Samuels plays the lead character on Wolf's Landing, a gig that's made him a heartthrob and fodder for gossip columns and tabloids. He loves being an actor, a career he decided to pursue after being inspired by his favorite actor Levi Pritchard. Carter heard that Levi became somewhat of a recluse after retiring from acting and he's also aware that the town they're filming in is where the man he admires resides in. When he sees Levi talking to the show's director, Carter can't help but be awestruck and he remembers that this was the very same man who made him realize who he truly was.

Levi and Carter strike up a close friendship. They share the same taste in films and Levi is amazed that this young man is more than familiar with his body of work, especially the independent movies he made that weren't exactly box office hits. The two are attracted to each other but neither believes the feeling is mutual. Another hitch is the fact that Carter is out in the open about his sexuality while Levi, in spite of years of speculation and innuendo plus a highly publicized attempt by an ex to out him, is still very much in the proverbial closet.

The way one would gaze at the other as inconspicuously as possible or the open looks of longing; the "let's be friends" stance they both tried really hard to maintain while fantasizing about each other privately; the jealousy amid trying to be happy that they appeared to be happy in the company of someone else. I could go on and on but simply put, these two men were destined to be together. The only thing they need to figure out is what they want more: a job other actors would kill for or a chance at truly being in love and finding happiness.

I admit it. I was smiling for most of this book and squeeed more times than I can remember (though as quietly as possible since Oliver was fast asleep). Reading how Levi and Carter actually did become the closest of friends and how that developed into something showed how a well-paced story and well-developed characters can result in a book worthy of reading AND recommending. This was a friends to lovers story that sets the bar high for the rest of the books in the Bluewater Bay series and I'm gladly giving Starstruck five stars. On to the next one! ♥

Grab a copy of Starstruck on Amazon | Barnes & Noble | Kobo.