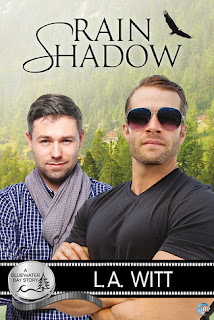 They say that distance is supposed to make one's heart grow fonder, but in the case of Jeremy Rose's teenage children, it appears that the opposite is true. After his divorce, moving to Bluewater Bay while serving as the bodyguard to one of the directors of the popular Wolf's Landing television series was exactly what he believed everyone needed. He needed to focus on his job while his kids needed space from him since they were blaming him for the demise of their family as they knew it. He doesn't have any inclination to enter into a relationship and when he meets marriage counselor Scott Fletcher, they both agree to keep things casual. A one-night stand leads to more and soon it's beginning to look like much more. But they've both got hang-ups from their pasts that could spell the end for a very promising future.

Bluewater Bay is one of those series that keeps on giving and I've been happily devouring each new addition that comes along. The fact that it's multi-authored gives the series keeps things fresh, but there are some authors that you wouldn't mind getting more than one serving from, as is the case with L.A. Witt, who penned the series starter, Starstruck, and co-authored the fourth book, Lone Wolf, with Aleksandr Voinov. While there have been other characters in the series that were in their forties, this tenth book, Rain Shadow, has both lead characters in that particular age group. An added creative touch was having Jeremy Rose fairly new to being with other men while Scott Fletcher has more experience at it. Then you've got Jeremy's issues with relationship therapists and Scott's issues with cops to add more conflict.

As always, I enjoyed being back in Bluewater Bay and having a story that involved two older men who were previously in committed relationships and are now wary about doing so again with someone new was something different. Jeremy's problems regarding his children, especially his daughter, are intertwined with his issues when it comes to talking to a professional, i.e. a relationship counselor. The demise of his marriage was inevitable and he felt he and his ex-wife wasted too much time discussing their problems with a marriage counselor. His view of counselors is jaded so it's quite ironic that he becomes involved with one. But then Scott's own experience with a man in law enforcement has him hesitant about taking things further with Jeremy, whose being a bodyguard has him possibly confronting dangerous situations.

It would be easy to say that these two should just have gotten over their respective issues in order to not have to go through any problems as a couple. However, they refused to acknowledge that they were even in a relationship, so there was this uneasiness as to whether to cross certain lines in their non-relationship. Scott appeared to be more open-minded and a bit more logical in his thought process, but I totally understand where Jeremy was coming from, especially since no parent wants to be told that they're handling a sensitive situation with their child the wrong way. The side story involving Anna Maxwell is intriguing, and I do believe she'll get her chance at finding happiness in the next book in the series. Each book in the Bluewater Bay series can be read as a standalone, and Rain Shadow is a good four-star read. ♥