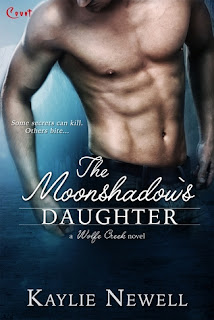 For two years, the case of Aimee Styles was all but dead, what with no clues as to what really happened to her on the day she disappeared. But Aimee is still very much alive, although she isn't quite the young woman she once was. All it took was one bite that turned her into a werewolf, and it was enough to make her hide within the forests of Wolfe Creek. She doesn't believe she can ever go back to the life she led and even though she misses her family and friends, she makes do. Then she's struck down by the flu and the town doctor, single dad and widower Jake Blackstock, is brought in to take care of. Soon, both Jake and Aimee are falling for each other, but will Jake be able to accept the truth about Aimee before it's too late?

The Moonshadow's Daughter is the third and presumably final novel in the Kaylie Newell-penned paranormal romance series entitled Wolfe Creek. Fans of the series have gotten bits and pieces of Aimee Styles's story of how she came to be a werewolf and her decision to go into hiding. Here, readers finally get the resolution to her tale and she finds it with Dr. Jake Blackstock, who lost his wife just a year ago after an animal attack and has been caring for his young son ever since. This is my favorite among the three books because I liked how the relationship between Aimee and Jake developed and how everything seemed to come full circle. The answers we've been looking for are up for grabs and offered in an entertaining way.

This was a fast-paced and well-written story and had that air of mystery and suspense that's been consistent all throughout the series. All the elements blend well together and while it is a love story, Aimee and Jake's tale isn't overly romanticized, especially since Aimee is keeping her being a werewolf secret from Jake and we all know that secrets never stay hidden for long. Like I mentioned earlier, I'm presuming this signals the end to this trilogy, especially since there weren't any other supporting characters that stood out and are worthy to get their own stories told. This book about life's second chances gave the Wolfe Creek series a fitting end and tied up all loose ends. The Moonshadow's Daughter gets 4.5 stars. ♥