Review: Something in the Way He Needs by Cardeno C. (Family #1) 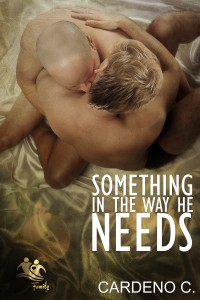 Thirty-nine-year-old Asher Penaz is an alpha male who exudes dominance whether as a police captain or in the bedroom. He lives his life in his own particular way and has never felt the need to change for anyone. When he meets his best friend's brother in Vegas, there's no denying that thirty-three-year-old Daniel Tover is the most beautiful man Asher's ever met. Daniel is someone who goes where the wind takes him, while Asher is a man who has prefers order and control in every aspect of his life. But there's a connection between the two of them that appears to go beyond the usual instant attraction. Then Asher offers Daniel a place to stay in San Francisco, and both their lives change in ways neither anticipated. Accepting their differences while making changes will be needed if they hope to live in love and harmony.

Something in the Way He Needs is the first book in the Family contemporary M/M romance series from author Cardeno C. This was a love story between two men, Asher Penaz and Daniel Tover, who seemed to be opposites in terms of outlook, personality, and temperament, yet shared a desire and love that made them want to work on a relationship that didn't really make much sense to those around them but was exactly what they both needed. I'm not to sure what to make of Asher's spur-of-the-moment invitation to Daniel to come with him to San Francisco since they barely knew each other. Daniel only did relationships, so I couldn't help but wonder if part of Asher's offer was brought about by his wanting Daniel in his bed since living together was part of being in a relationship. It just didn't gibe with the kind of man Asher was.

Story-wise, I liked how this was about falling in love with the one person who makes you want to be the best version of yourself. Yes, there were moments that Asher's behavior was bordering on bullying and I sure as heck would probably have walked out if someone like that, especially when it wasn't just a singular occurrence. And while I was not a fan of his said behavior toward Daniel, I did appreciate the development of his character and how made the transition from dominant male who was overly rigid to someone who gradually became more pliant and welcoming of the positive things Daniel brought into their relationship. The twist involving Daniel was a complete shock and it made him an even more appealing main character than he already was to begin with. Series starter Something in the Way He Needs is getting four stars. ♥

Purchase Something in the Way He Needs on Amazon | B&N | Kobo | Smashwords.