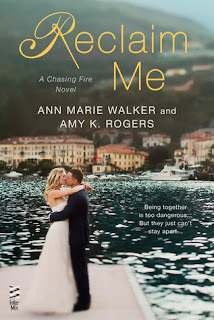 Note: This ARC was provided by Penguin Group - Berkley, NAL/Signet Romance, DAW in exchange for an honest review.

Hudson Chase and Alessandra Sinclair were each other's first love and they want nothing more than to make up for all the years they lost while apart. Unfortunately, someone from Allie's past refuses to admit defeat and uses Allie to get to Hudson, threatening to expose a dark secret that could cost Hudson everything he's worked hard to achieve. In order to guarantee Hudson's freedom, Allie may be forced to let go of the one thing that means most to her--a future with the man she loves. But Hudson has waited too long and overcome too much to finally be with Allie to simply walk away from what they have. They may be tempted to save the other by facing this particular battle on their own, but if it's one thing their history has taught the two, it's that Hudson Chase and Alessandra Sinclair are far stronger when they're together.

Hudson Chase and Allie Sinclair's heartrending love story has held my attention from the time I read the first book, Remind Me, in April as the erstwhile lovers crossed paths after a decade apart, and followed along faithfully as they struggled with moments of doubt and suspicion in the second book, Release Me. Now, one of my most anticipated reads of 2015 is finally here and we get the answers that we've been waiting for and join Hudson and Allie as they once again fight for their much deserved happy ending. Authors Ann Marie Walker and Amy K. Rogers put our main characters through the wringer, something that I was already expecting, yet they once again surprised me with how they added their own twists and turns to Reclaim Me, the third and final book in the Chasing Fire series, so as to make it an exciting read.

With yet another cliffhanger ending in book two that left me whining at the unfairness of it all, Allie and Hudson find themselves up against the one person that could take away everything from them and in this conclusion to the the trilogy, my suspicions regarding Julian Laurent were confirmed as was my continuing stance on him being an unrepentant master manipulator. In my head, I had an idea what Allie and Hudson were going to go through but the manner in which everything kept me in my toes because I didn't predict how it was all going to play out. I liked the side story involving Nick Chase and Harper Hayes because those two just seemed to work as a couple but no one beats Hudson Chase when it comes to both the sweet and steam that are necessary to keep a relationship like the one he has with Allie constantly hot.

The end of a series is often bittersweet and such is the case for Chasing Fire. For a good long while, nothing seemed to come easy for our Hudson, except when it came to adding on to his business portfolio after her became a billionaire, but then the things worth fighting for are those that come at a higher cost. He may have appeared cold and calculating, but with Allie, the man was fiery and fierce. He was as alpha as ever in the bedroom and the boardroom, but he also had an air of romanticism to him, one that had Hudson Chasers swooning. I'm sad to see the series end but, as a fan, I love the way that everything came together. Hudson and Allie released the past, reclaimed each other, and reminded one another that what they had was worth everything. See what I did there? ^.^ Reclaim Me is a 2015 favorite and gets five stars. ♥