Review: Rules of Protection by Alison Bliss (Tangled in Texas #1) 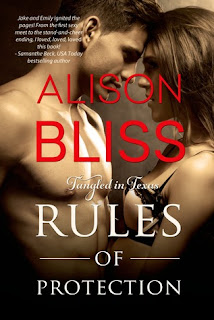 For a moment, we both lay motionless.

"An involuntary reflex," Jake said. "Roll over at your own risk."

"Is it going to be a chronic condition?"

"God, I hope so. I'm too young to have those kinds of medical issues."

"What?" he asked. "Sandwiching a pillow between us?"

The last thing she expects on her twenty-eighth birthday is to witness a murder that has her becoming the latest addition to the Witness Protection Program, which requires a makeover and a new name--Emily Foster. She's also got herself her very own babysitter in the form of FBI Special Agent Jacob Ward. Jake's a stickler for the rules and will make them up if there aren't any set in place. When her life is put in danger after a safe house is compromised, Jake takes her to the one place where he knows no one will think to find her: the backwoods of Texas. With these two pushing each other's buttons, the tension between them amps up, and it's the kind of tension that doesn't just have Emily and Jake wanting to tear their hair out in frustration but they're doubly tempted to tear off one another's clothes and finally break every single rule.

There are books that are just so darn good that you become an instant fan of the author. Then there are those books that are debut releases that simply knock you off your feet with that much coveted combination of fantastic writing, an original and creative story, and a cast of characters that you wish existed in real life. Well, I got that double whammy with Rules of Protection, the first book in what promises to be one heck of a romantic suspense series entitled Tangled in Texas. Not only did I become an instant fan of Alison Bliss's, but I'm still in awe that this was her debut. I've had this book in my tablet since November 2014, and while it's taken me eleven months to read it (due in large part to being approved to review the sequel), at least now I can say that I finally get what other readers were raving about last year.

This is the kind of novel that you can't help but envision in your head and it plays out like a romantic comedy film with just the right amount of suspense and mystery added to the mix. Lead characters Emily Foster and Jake Ward are opposites that probably wish they weren't do drawn to one another but the attraction is undeniable. Their exchanges are often filled with zingers and I lost count of the number of times that I couldn't stop myself from laughing out loud. Okay, it was more of me snorting out a laugh, but you get the picture. When you add in Jake's quirky group of friends and his aunt and uncle, the humor is amped up and you get a variety of it--sometimes witty, other times snarky, and then there's the occasional slapstick comedy--but always written in a way that doesn't pander or insult the intelligence of the reader.

Emily and Jake are far from perfect, and there are times that you wish you could smack them for their insensitivity or for their terrible decision-making, but they're easy to relate to and are essentially good people, all of which make them even more appealing. What you see is what you get with these two and even with their missteps, you can't help but empathize with what they're going through. Times are far from boring when Emily and Jake are around and they bring to life this zany misadventure of a love story. Whether they're getting on each other's last nerve or tempting one another with kisses and innuendo, Emily and Jake have proven to be an irresistible pair. One thing's for sure: in just a little over two hours' time, I fell in love with Rules of Protection, which is why it gets five-plus stars and is an all-time fave read. ♥