Review: Something Like Love by Sara Richardson (Heart of the Rockies #2) 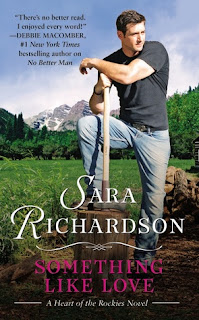 With his senatorial campaign desperately needing to shift the focus off of false animal abuse accusations against him, Ben Noble heads back to Aspen, Colorado for a bit of R&R mixed in with some necessary PR at Walker Mountain Ranch. Having Paige Harper is their group's mountain guide is an added bonus and provides Ben with an opportunity to get to know the woman who walked away from him much better. Unfortunately, Paige refuses to have anything to do with Ben, pegging him as a womanizing playboy too used to getting what he wants because of his family name and wealth. She nearly fell for him once and learned her lesson. But being in close and constant proximity has Paige tempted to lower her defenses because the more she keeps her distance, the more determined Ben is to prove that they belong together.

Something Like Love is the second novel in author Sara Richardson's contemporary romance series, Heart of the Rockies, and tells the rest of the story of Ben Noble and Paige Harper which began in the first novel, No Better Man, and truly became a love story here. You can read either book separately from each other, but I do recommend that you read both in order because the groundwork for the mistrust that Paige feels toward Ben is told in book one and I'm not going to get into it in this review. Suffice it to say that there's a good reason why Ben works as hard as he does in book two to earn Paige's trust, and later on, her love and respect. We also learn why Paige is wary of men like Ben and why she would rather stay away from him, even though he's the only man to ever make her feel the way she does.

Ah, Ben. Goodness, the man definitely knows how pursue the woman he's got his sights set on, but he's also careful about how he does it. He pushes but doesn't necessarily force himself into every aspect of Paige's life. If anything, he wants to show her that he's in it for the long haul and that he doesn't expect anything other than a chance to get it right this time around. He's a great guy who also happens to love his family and has a sense of duty instilled within him, making him want to do the legacy started by his grandfather and continued by his late father proud. Does he do everything right the first time around? Nope, but then the man isn't meant to be portrayed as some perfect male specimen. He's human and he falters from time to time, but he's persistent and when he's done something wrong, he does make up for it.

Paige is a woman trying to find her place in the world. She's good at what she does but she does have difficulty dealing with certain people. While she enjoys her job as a mountain guide, her heart is set on something with the potential to benefit the handicapped. I love how that ties in to how she fosters a friendship with Ben's younger sister Julia, who is wheelchair-bound due to an accident twelve years ago. This plays a role in her own relationship with Ben and it tests them more than once, but then there are numerous hurdles that stand before the couple and their happily-ever-after, many of which were instigated by Ben's status-conscious mother, Gracie. All in all, Something Like Love was a wonderful story about following our dreams and sharing those dreams with people who mean the most to us. Five stars. ♥