Review: The Understatement of the Year by Sarina Bowen (Ivy Years #3) 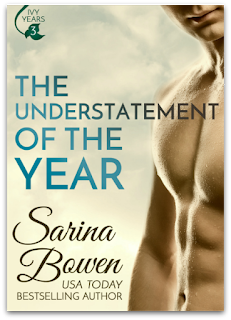 "Getting along together was never the problem with you and me," he said. "We're both easy. It's just the rest of the world that's hard."

Turning his back on his best friend five years is a betrayal that continues to haunt Michael Graham. The distractions of being a member of the Harkness ice hockey team and drowning in alcohol aren't enough when John Rikker walks back into his life as the latest player to join the team. Graham is freaked out, afraid that Rikker will tell everyone the truth about Graham's sexuality. After all, Rikker is the one person who knows because he's the only one Graham has ever loved. But Rikker remains silent, knowing exactly how it feels to be outed without consent. All he wants is the opportunity to play hockey and get an education. They avoid each other, pretending the other doesn't exist, but being around his former best friend makes it difficult for Graham to continue denying who he really is and how he feels for John Rikker.

The Understatement of the Year is the third full-length novel and fourth release in the highly touted new adult (NA) sports romance series entitled Ivy Years by bestselling author Sarina Bowen. Anyone who's familiar with my reviews or the books I've read knows that M/M romances are a personal favorite and I make it a point to highlight those that have captured both my attention and my heart with beautifully written stories and characters that inspire. I'm thrilled to say that The Understatement of the Year is a book that deserves the accolades that it's received ever since its release almost one year ago, and I'd like to add my own via this honest review. This may not have been originally written to spark inspiration, but that's exactly what it did, as thought-provoking and emotionally stirring as this book has turned out to be.

I wish I could aptly put into words how this book made me feel but I doubt that I can compose a review that clearly describes everything going on in my head and heart. Michael Graham and John Rikker may both be gay, but Graham has been hiding from the truth and was trying to outrun his past until Rikker re-appears after five years of not seeing each other. The choices that Graham made five years ago evoke different emotions because it isn't too difficult to understand why he did what he did, being only sixteen and bombarded by fear of what violent homophobes would do to him. Of course, the guilt that weighs upon him when he sees Rikker again stymies him repeatedly from making amends to the one person who's always meant the most to him. So, you have this mix of frustration and empathy for Graham throughout.

As I was reading the book, I couldn't help but ask myself what I would have done in the various situations that Graham and Rikker found themselves in. They both dealt with the hurdles thrown their way differently, the one who escaped physically unscathed five years ago allowing the fear of rejection and public apathy to get the better of him while the one who ended up in the hospital embraced his sexuality and lived his life. That's the thing with trauma--just because you walk away without any visible scars doesn't automatically mean that you don't have any on the inside, and more often than not, those are the ones that take the longest to heal. I know it's taken me nearly a year to read The Understatement of the Year but this five-plus-starred read is one I would recommend to anyone at anytime. It's just that amazing. ♥

Purchase The Understatement of the Year on Amazon | B&N | Kobo.