Review: Crash Into Love by Sofia Grey (Love at the Beach #1) 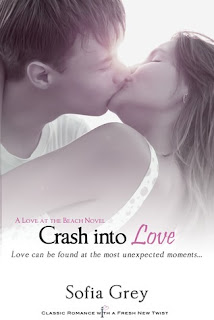 Cass hopes spending time in a cottage along the beach will help her finish her novel, but when a group of students arrives to use the neighboring cottage, she finds inspiration for a different kind of story. Among the five individuals, it's the one she's labeled the loner who holds her attention the longest. She learns that his name is Jonah and he's ten years her junior, and while he's only a few years older than her own teenage son, the age difference isn't enough of a factor to dissuade Cass and Jonah from pursuing their attraction. Her feelings for Jonah are real, but something seems to be holding him back, and when she finally stumbles upon the secrets Jonah's been trying to hide, will Cass's love be enough to keep him by her side?

Crash Into Love is the first novella in the Love at the Beach series from author Sofia Grey and while it may be a quick read, it certainly doesn't lack in terms of character or story development. Cass is a thirty-four-year-old novelist who can't help but notice quiet twenty-four-year-old Jonah. The connection between the two is strong and I liked that while the ten-year age difference may have given Cass pause, it wasn't really that huge of a consideration for most of the story. Cass and Jonah share a passionate love story, and while this is a case of love developing over just a few days, they're both faced with heavy issues (i.e. secrets from his past) that they need to be overcome if they hope to have any sort of future together.

Having a love story (the one that Cass finds herself writing) within a love story (Cass and Jonah's) is an interesting one, but if I'm going to be honest, the former didn't really capture my attention. Yes, it was a creative touch and I'm sure there were readers who enjoyed reading it as Cass was writing it, but my sole focus was really on what was happening between the two main characters. I wasn't exactly thrilled by the epilogue, even if it was meant to give some sort of hopeful closure to the fictional characters of Joseph and Tami. All in all, Crash Into Love was such a pleasant four-starred surprise, and you'll understand why I say this when you read my review for book two, His Temporary Fix, which I actually read before this first one. ♥