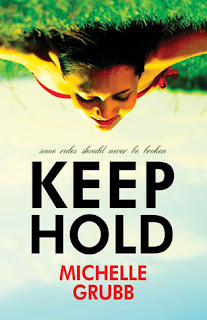 When Claire O'Malley's girlfriend informed her that she was moving to Berlin and made no move to invite Claire to come along with her, she knew their relationship was over. If she was honest with herself, it was going to end sooner or later anyway. She's been experiencing nightmares filled with various scenarios that have her killing her ex. Her pregnant former girlfriend, Jess Mercer, who is now her best friend, and Jess's wife Alex are there to give her the love and support that she needs. What she doesn't need is to begin developing a crush on Jess's older sister Kathryn, a divorcée who claims she isn't homophobic but doesn't seem to be all that comfortable around Claire, Jess, or Alex. Falling for a woman who's straight isn't a good idea, but keeping hold on her feelings isn't all that easy when Claire's sharing a house with Kathryn.

Keep Hold is a standalone F/F contemporary romance by author Michelle Grubb and is a love story between thirty-one-year-old Claire O'Malley, an emergency room nurse who broke up with her girlfriend four months ago, and thirty-nine-year-old Kathryn Mercer, an accountant who divorced her boring husband three years ago. Claire and Kathryn are tied together by way of Jess, Kathryn's younger sister and Claire's ex-girlfriend, who is now married to Alex and expecting twins. The story presents an interesting twist in that Kathryn has always been heterosexual plus their attraction to one another could affect their respective relationships with Jess. The fact that all four of these women are currently living under the same roof (since Claire and Kathryn both have housing problems) complicates things further.

Claire's issues with her recent breakup are affecting both her mental and physical health, but while pursuing a secret affair with Kathryn is stressful, it also helps her make certain realizations with as far as her past relationship is concerned and what she wants from being with Kathryn. Then there's Kathryn, a woman who has been straight for all her life and then begins to develop feelings for her sister's ex. The possibility that she's actually a lesbian is one that she's not all that thrilled about and it's a perfectly understandable reaction. How she and Claire deal with their respective and joint issues are what make this book an interesting and enjoyable read. There were a lot of humorous moments mixed in with the much heavier times the cast of characters faced, and while it did have issues, Keep Hold is a solid four-star read. ♥