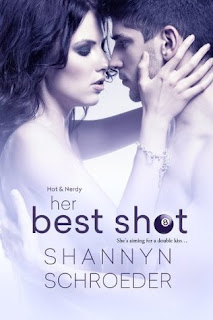 College senior Layla Sharpe has just been offered a job after graduation at the NSA and she's ready to celebrate with her two best friends. When a planned road trip finds her stranded to Texas finds her stranded in Georgia, Layla crosses paths with a hot looking pool shark who teaches the math expert a thing or two. An offer of a roof over her head while she's stuck in Georgia quickly has her becoming intimate with Phin Marks. It's clear that what they have is beginning to mean much more, but he refuses to stand in the way of her future. Will Phin be forced to let her go or will Layla hold on to her best shot at happiness?

Her Best Shot is the first novella in the Hot & Nerdy new adult (NA) romance series, which is about three best friends who are all in their final year of college and happen to be beautiful and nerdy, from Shannyn Schroeder. Book one is about Layla Sharpe and Phin Marks and while Layla has a plan for her future, being with the former gypsy that is Phin makes her crave for more spontaneity and adventure. On the other hand, Phin has a plan of his own, but while he may have wanted to get away from his gypsy life, he still is somewhat of a wanderer, unable to really plant roots in one place and have a more stable lifestyle.

This was short and interesting, but I would have wanted a bit more character development. There was also a couple of points in the story that felt rushed, especially at the end. By the time I write this review, I will have finished all three books in this first set of Hot & Nerdy books, and they all appear to carry a similar trend of having happy-for-now endings, which I can more than appreciate because the main characters are still in their early twenties and things can certainly change. For a series starter, we get teeny tiny glimpses at Layla's best friends but still enough to make one mildly curious. I'm giving Her Best Shot three stars. ♥