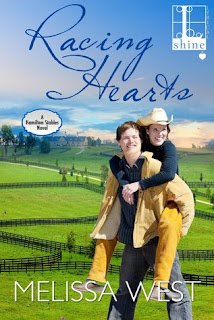 It's taken two years for Emery Carlisle to get back on her feet and even though she got the go-ahead from her doctor to literally get back on the horse, she's hesitant. Her father is also being overly protective, so Emery is left with no other alternative but to give Trip Hamilton a call. He just happens to be the best horse trainer in the country and the first boy Emery's ever loved. With an unresolved past, they both know that working together will be complicated, especially since they're both used to getting their way and to winning anything they set their minds on when it comes to horses and horse-racing. Will these erstwhile lovers focus on bringing in trophies or will they end up losing their hearts to each other one more time?

Racing Hearts is the first novel in the Hamilton Stables series from author Melissa West and this is a second chance romance set in world of horses and horse-racing in the state of Kentucky. Emery Carlisle and Trip Hamilton met and fell in love when she was seventeen and he was twenty but things ended when Trip accepted a job as an assistant horse trainer elsewhere. The two went on to make names for themselves--Emery as a racing jockey and Trip as a horse trainer--both becoming the best in their respective fields. After Emery suffers an accident that takes her two years to recuperate from, she turns to Trip, hoping that she can convince him to hire her as a rider and hopefully winning the Kentucky Derby.

This was a well-written second chance love story and I liked that ample attention and focus was given to the horse racing and horse training aspect and not solely on the romance. Both Emery and Trip still have feelings for each other, feelings that they had kept buried for eight years but never experienced with anyone else after their short-lived time together ended. Family is an important element to their respective lives and to their love story, and the role their families play sometimes led these two to making certain decisions that could have benefited from a bit more thinking and soul-searching. But it's clear that what these two share is something strong, even if it'll take quite a few misses before they finally get things right.

After having read No Kissing Allowed, I immediately put in a request to read and review Racing Hearts once I  saw it on NetGalley. It took one book to show me that Melissa West was an author I had to keep my eye on and with this Hamilton Stables series starter, my faith in her writing abilities remains steadfast. She came up with a love story that's strong in both character building and storytelling and I enjoyed every minute I spent reading this book. Emery and Carlisle lead a cast of characters that I'm sure we haven't seen the last of and I'm looking forward to reading Alex and Nick Hamilton's respective love stories next year, both of which I shall be adding to my to-be-read list. Racing Hearts was a 4.5-starred start to the series! ♥