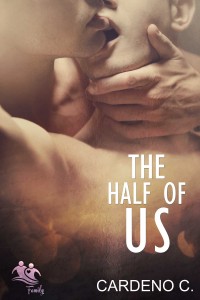 Note: This ARC was provided by The Romance Authors via NetGalley in exchange for an honest review.

Forty-two-year-old Jason Garcia is a successful cardiac surgeon whose dreams of having a close-knit family were shattered when he and his wife divorced after his repeated cheating. He shares custody of his two children, but being a part-time father was never part of his plans for his family. Being single, however, affords him the luxury of hooking up with whomever catches his fancy. When he comes across twenty-six-year-old high school teacher Abraham Green in a bar, the connection between them is palpable. Abe may not be the type to engage in one-night stands but Jason is far too tempting and he gives in. But when one night proves to not be enough for either of them, will they be able to overcome all the obstacles standing before them in order to pursue the very first relationship that could lead both men to a lifetime together?

The Half of Us is the fourth novel in the Cardeno C.-penned Family series and was actually both the first book in the series that I read and my very first read from the author. The blurb caught my attention the minute I read it on NetGalley and didn't know it was part of a series until the author's other works were listed in the book. This is the second edition and all the other books also have second editions as well as new covers, but the first three books I have are actually first editions since I wanted to get my hands on them before the newer ones were officially released. This fourth book reads quite well as a standalone since I was able to fully enjoy Jason Garcia and Abe Green's love story without any prior knowledge of what happened with Jason's cousins in the prior releases, though I did notice Abe when I got to book two.

This being my first read, my standards were set quite high for the three other books because I absolutely loved Jason and Abe's story, both as a couple and as individuals. Jason is not an easy man to love but it takes someone like Abe, who always sees the good in others and never loses hope, to make Jason feel cared for and secure in a relationship. I quite liked reading about Jason's relationship with his ex-wife because there's genuine affection between them but they have discussions about their children. This was a story about how family does not always equate to a man and a woman and the children they bring into the world. It is the one you create for yourself with the people who you choose to share and be yourselves with, dedicating yourselves to one another. I'm highly recommending The Half of Us and give it five stars. ♥

Purchase The Half of Us on Amazon | B&N | Kobo | Smashwords.