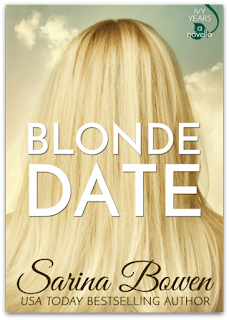 If her last humiliating encounter with her ex-boyfriend taught Katie Vickery anything, it's that she's had it with football players. The fact that she'll have to see her ex at an event involving her sorority and his fraternity already has her anxious, especially after what he did to her the last time they were together. So, when her roommate suggests she go out on a blind date with a varsity basketball player, one who also happens to be a nice guy, Katie readily agrees. Adam Baschnagel is the antithesis of the jocks she's been with recently. As their evening wears on, Katie realizes that different may be exactly what she needs and she's ready to prove to Adam that, more often than not, the good guy actually does get the girl in the end.

Blonde Date is a novella written by Sarina Bowen and is part of the Ivy Years series, to be read after the second full-length novel. The events here overlap with those in one of the latter chapters of The Year We Hid Away and is about the blind date that Adam Baschnagel, a Harkness varsity basketball player and neighbor and friend to Bridger McCaulley, and Katie Vickery, Scarlet Crowley's roommate and known as Blonde Katie, are set up on by their friends. Adam's had a thing for Katie ever since he first saw her but never thought he had a chance with the blonde beauty. On the other hand, Katie's focus has only been on two footballers but after her ex and his frat brothers humiliate her, she welcome the change Adam brings.

This was a lighthearted story, one that was a fun read and that had a lot of humor. I think that Adam and Katie being such an unlikely couple becomes an opportunity for them to see the possibilities that actually exist should they decide to go beyond one blind date. Both Adam and Katie were memorable supporting characters in The Year They Hid Away, with Adam showing just how good a guy he is to both Bridger and Scarlet and Katie with the unexpectedly hilarious stuff that comes out of her mouth (and yes, I liked her much more than Ponytail Katie). The interaction between Katie and her ex-boyfriend, Dash McGibb, at the end had me wishing I could give the girl a much-deserved fist bump. Blonde Date receives five stars. ♥