Review: The Year We Hid Away by Sarina Bowen (Ivy Years #2) 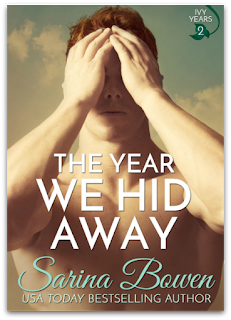 Having people accuse your father of molesting young boys and then having media outlets camp out in front of your home would probably make anyone feel the urge to change their name and get as far away as possible. As a freshman in Harkness College, Scarlet Crowley was more than prepared to start her life anew, away from the mess her family was drowning in, even if it meant turning her back on the sport she loved. Hiding behind a new name and crafting a fake life story isn't as simple as it once seemed, especially when she meets Bridger McCaulley, a former ice hockey varsity player with a reputation for hooking up with different girls. It appears that Scarlet isn't the only one with secrets to keep and with both she and Bridger dealing with life-changing decisions, they can choose to face them alone or be there for each other.

The Year We Hid Away is the second novel in the Sarina Bowen-penned Ivy Years series that brings together the sport of college ice hockey and romance. Bridger McCaulley and Scarlet Crowley have a lot in common--they're both keeping secrets from everyone around them, they both love ice hockey, and they're both falling for each other. As much as possible, these two prefer to handle their respective situations on their own, refusing to ask for help from even those closest to them. Bridger is a familiar character to fans of the first book in the series, The Year We Fell Down, what with being best friends with Adam Hartley and a member of the ice hockey team. He also used to be somewhat of a manwhore on campus. Here, Bridger has left the team and doesn't have the time to hook up with girls because of family responsibilities.

It's easy to understand why it Bridger and Scarlet are hiding a part of their lives from other people, even if their reasons are different--Bridger for the sake of his younger sister Lucy and Scarlet for the sake of experiencing college life without family and legal distractions. Engaging in a relationship proves to be the anchor that the other needs, even if it means remaining mum about certain aspects of their lives. The thing is, keeping secrets always takes a toll on an individual, and yes, the stress will seep into their relationships with the people they're keeping those secrets from. In the case of Bridger, your heart can't help but squeeze in empathy for the guy because he's desperately trying to be the responsible brother to his sister Lucy but the additional burdens of school and work plus hiding a part of himself will eventually get to him.

When I originally read the synopsis for this second in a series, I thought the secret Bridger was keeping was one thing but ended up being something I so didn't see coming even if it still involved the same person. Then there was the twist involving Scarlet's own family dilemma, and that was a complete shocker as well. This story was different from the one in the first book yet still brings with it elements of love, friendship, and trust, and ties in with, of course, ice hockey. The introduction of new supporting characters evokes the same curiosity and eagerness to learn what could be up next in the series. As early as the first book, I already had a feeling that the Ivy Years series would turn out to be an all-time favorite, and each new book I read is proving my gut right. The Year We Hid Away is a worthwhile five-star read. ♥

Purchase The Year We Hid Away on Amazon | B&N | Kobo.