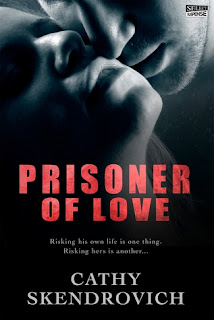 Nicky Costas is in prison for crimes he committed while working under mob boss Anton Farelli, but he's also suspected of skimming from Farelli and it takes one very physical and painful reminder from the man's thugs to force him into escaping. You see, Nicky Costas is actually Jake Dalton, a police officer working undercover and now he has no other choice but to clear his name. Running from the mob and from the authorities who have no clue who he really is, he's forced to commandeer the vehicle of Lucy Parker and ends up making her is unwilling prisoner. If things are complicated now, they're about to get worse. In the midst of betrayals, getting to the truth, and staying one step ahead of those who want them dead, Jake and Lucy discover that there's no one else they can trust and can rely on more than each other.

Prisoner of Love is a standalone romantic suspense novel from author Cathy Skendrovich and is published by Entangled Publishing's Select Suspense division. This book's synopsis captured my attention from the minute I read and I was prepared for a book that was filled with action, mystery, and suspense in the midst of an unexpected romance between main characters Lucy Parker and Jake Dalton. While there were indeed of all these things, I was left a bit wanting because both Lucy and Jake could have used some more development. Yes, these two were thrown together by circumstances and they fell for each other, but I wanted more substance as to who they were and what made them tick, especially Lucy, who I felt was limited to being a bookish, reliable woman  who was seen by idiotic men, not including Jake, as a "fat cow".

I liked the idea of a man on the run from his enemies and, due to his undercover work, the law falling in love with the woman who is first his hostage and then later the one person he turns to and helps him clear his name. While I appreciate that Lucy wasn't some waif-like damsel in distress, there was just too much emphasis on her being more voluptuous and I'm sorry but a size ten does not equate to someone being plus-sized. I did like, though, that Jake's attraction to her wasn't in spite of her curves but because of them, so that definitely earned him bonus points as far as I was concerned (but I ended up deducting a point or two for a good portion of Chapter 19). Theirs did feel like going from zero to sixty faster than you could blink but they did seem well-suited to one another. Prisoner of Love was a pretty okay 3.5-starred read. ♥