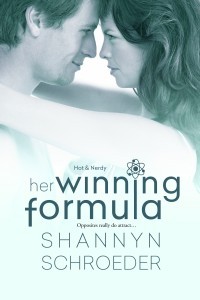 Felicity Stone has no problem making sense out of of formulaic equations, but when it comes to attracting the opposite sex, she simply can't figure out how to capture their interest. But from the moment Special Ed teacher Lucas Tanner meets her on a flight from Chicago to Texas, she's already got him interested. Inviting her to be his date to a wedding in order to dissuade an ex-girlfriend from getting too close was something she never thought she'd say yes to. In exchange, he can teach her a thing or two when it comes to men. Can he convince her that she doesn't need any other man because together, they've got chemistry?

Her Winning Formula is the third and final novella in the first set of Hot & Nerdy books from author Shannyn Schroeder. Chemistry student Felicity Stone and Special Ed Teacher Lucas Tanner meet at an airport and end up spending time together when Lucas asks her to be his fake girlfriend while attending family gatherings centered around his brother's wedding. The story sticks to the usual formula of a fake couple falling for one another and ending up wanting their relationship to be the real thing, but I felt the chemistry, pun intended, between these two main characters a bit lacking for a good portion of the book.

This third book suffers from the same issues as the first one in that there wasn't that much in terms of character development. Add to that a lack of believability when it comes to Lucas and Felicity being into each other and you end up with a book that was okay but not having that extra something that would have set it apart from books that share a similar story line. The three novellas can be read as standalones but they're also available in a combined release. A second set of Hot & Nerdy books is in the offing, this time featuring guys as having the aforementioned qualities. Her Winning Formula gets three out of five stars. ♥