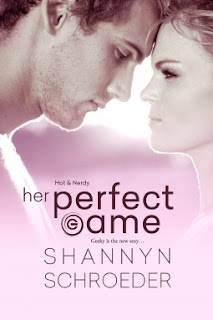 It's been three years since Jonah Best walked away from Charlie Castle after he graduated from college. Now, they find each other again at a convention for computer hackers, and even though he broke her heart, Charlie can't deny the way Jonah still makes her feel. In their time apart, Charlie has further improved her skills and Jonah sees that she would be perfect addition to their research and development team. However, the end of their relationship was never fully resolved and Jonah's keeping a secret from Charlie, one that may spell the end of their second chance together, as well as their working relationship.

Her Perfect Game is the second novella in Shannyn Schroeder's Hot & Nerdy series and is about two computer experts who were once lovers and meet again three years later. Jonah Best had his reasons for leaving Charlie Castle after he graduated college. Jonah is a nice guy, but when he revealed his real reason for turning his back on Charlie, my opinion of him dimmed a bit. I'm sorry but that was mighty cowardly of him, and it was an insult to Charlie. If you truly love someone, you discuss things and help them overcome whatever hurdle they may be facing. The fact that he just upped and left her made him look like a jackass.

On the other hand, I liked Charlie, even when she was feeling somewhat insecure about dropping out of college. She was smart and self-efficient and the fact that she didn't really need Jonah or the help that he was offering proved that she was much more than how Jonah had her pegged three years ago and during their time at the hackfest. The story here was a bit more interesting than in the first book and Jonah and Charlie having a history together provided a good foundation to their character development. Thankfully, Jonah somewhat redeemed himself by the end so I don't totally hate him. Her Perfect Game gets 3.5 stars. ♥