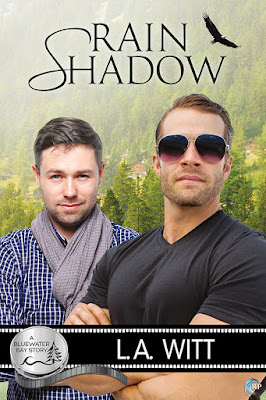 About Rain Shadow
Jeremy Rose came to Bluewater Bay to work as Anna Maxwell's bodyguard, not to escape his increasingly bitter relationship with his estranged kids. He just wants to focus on his job and be alone for a while. He's done with love, especially now that three years after his long overdue divorce, he's got a front-row seat to the rapid deterioration between Anna and her girlfriend. Cynical doesn't even begin to describe him.

Except Jeremy refuses to seek counseling for his broken family, and Scott refuses to get seriously involved with men who work dangerous jobs. They both need to realize they can only hide for so long from the pain they came here to escape. They must face their pasts before they lose their shot at a happy future. 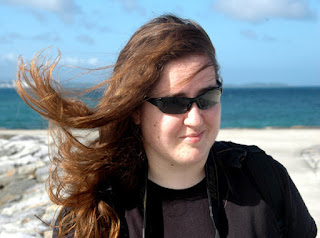 L.A. Witt is an abnormal M/M romance writer who has finally been released from the purgatorial corn maze of Omaha, Nebraska, and now spends her time on the southwestern coast of Spain. In between wondering how she didn't lose her mind in Omaha, she explores the country with her husband, several clairvoyant hamsters, and an ever-growing herd of rabid plot bunnies. She also has substantially more time on her hands these days, as she has recruited a small army of mercenaries to search South America for her nemesis, romance author Lauren Gallagher, but don't tell Lauren. And definitely don't tell Lori A. Witt or Ann Gallagher. Neither of those twits can keep their mouths shut...

L.A.’s backlist is available on her website, and updates (as well as random thoughts and the odd snarky comment) can be found on her blog or on Twitter.

Every comment on this blog tour enters you in a drawing for a choice of two eBooks off L.A. Witt's backlist (excluding Rain Shadow) and a $10 Riptide Publishing store credit. Entries close at midnight, Eastern time, on October 24th, and winners will be announced on October 26th.  Contest is NOT restricted to U.S. entries.