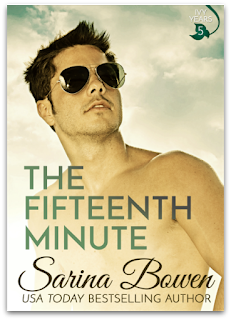 Lianne Challice is used having fans asking for autographs and requesting for selfies with her. What she isn't quite prepared for is the reception she receives from many students once she attends Harkness College. They make jokes about her most famous film role and would rather stay away from her than get up close and personal. So, in her first semester, she goes to her classes and stays cooped up in her room, avoiding interactions with anyone. Having a neighbor who insists Lianne needs to go out and have fun helps her enjoy a bit of a social life and provides an opportunity for her to meet Daniel Trevi, the deejay for the school's hockey teams. DJ makes her feel like she's just a regular girl. They're both into each other, but DJ can't pursue his feelings for her because he isn't sure how much longer he'll be a Harkness student.

The Fifteenth Minute is the fifth full-length novel and the latest addition to one of my all-time favorite series, Sarina Bowen's highly addictive Ivy Years. Nineteen-year-old freshman and famous movie actress Lianne Challice is experiencing how it is to be a student for the very first time in her life but she only begins to find enjoyment in life outside the walls of her classrooms and dorm room months later. When she and twenty-year-old sophomore DJ Trevi meet, there's a connection between the two of them, and they discover that they have a mutual love for music. As much as these two want to engage in all the normal stuff two people who are romantically and sexually interested in each other do, DJ is facing a complaint against him that's already cost him housing and could end up with him losing his place in school.

Both Lianne and DJ are the youngest main characters in the series so far, but their love story and that of DJ being accused of something he insists he did not do continue to showcase the author's ability to create an evocative story that balances out the drama and angst with a fair amount of light humor. It was interesting to have someone of Lianne's stature and popularity be thrown into a situation that she believed would be most beneficial for her and yet have what she is--an actress--become her greatest source of notoriety on campus. Then you have DJ's difficulties that have forced him into a precarious situation and one that points out the inadequacies of the school's system of trying to ferret out the truth while seeking justice for the true victim. You feel for the young guy because that's a lot of weight to carry.

There are currently six books in the Ivy Years series, five of them full-length novels and one a novella, and I have yet to be disappointed. I have no clue as to whether or not there are more books in the offing, but I sincerely hope that there will be because Sarina Bowen has come up with a number of supporting characters who I think deserve a chance in the spotlight, namely Leo Trevi, now the captain of the men's hockey team with an ex-girlfriend I believe he still loves, and Dash McGibb, a Beta Rho member and former varsity football player who had two unforgettable appearances. I'm keeping my fingers crossed that The Fifteenth Minute doesn't signal the end to the series. Expectations met, this book gets five stars. ♥