Review: Fighting the Fall by Jennifer Snow (Beyond the Cage #2) 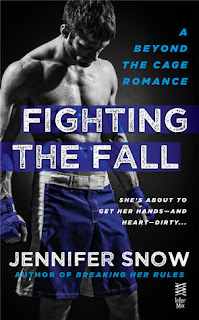 MFL light heavyweight champion Tyson Reed knows preparation is key in any upcoming battle, including his title defense in a few weeks' time. It appears that Hollywood actress Parker Hamilton knows all about preparation as well and for an upcoming role as an MMA fighter, a role she considers a career-changer, she wants to work with the best and that's none other than Tyson. Distractions are something that Tyson has learned to avoid if he wants to continue to be at the top of his game--both as a fighter and as a gym owner and trainer--but avoiding the attraction he shares with Parker is one battle he looks more than ready to lose. Their chemistry is off the charts but Tyson is still denying the intimacy that would make what they have something far more. After all, aren't happy endings reserved only for fairy tales and films?

Fighting the Fall is the second novel in the Beyond the Cage contemporary romance series from author Jennifer Snow and turns the spotlight on Tyson Reed, owner of Punisher Athletics, MMA champion, and trainer to Walker Adams and friend to Gracie Andrews from the first novel, Breaking Her Rules. Tyson was a supporting character that captured my attention from the time he first appeared and I'm glad that the second book in the series is about him. When he meets Parker Hamilton, neither of them exactly leave the best of impressions on one another, but then it could also be a matter of preconceived assumptions on both their parts. The fact that they don't get along and that they try to avoid each other creates more sparks between the two of them and once they do become close, they see one another in a whole new light.

While Breaking Her Rules was a pretty good read, this second in a series far surpassed whatever expectations were set by its predecessor. It felt as if everything was taken up a couple of notches and I found myself enjoying both the story and the characters much more this time around. Even the supporting characters and the side stories involving Tyson's older brother, Connor, and Parker's original trainer, Dane Hardy were just as interesting as the main story. The combined worlds of MMA and Hollywood made this book a great read and one that has certainly raised the bar higher for the third book, which is about Dane. I am curious, though, if Erik Johansen is going to get his story told and I hope it does because he's a guy that readers love to hate and needs a chance to redeem himself. Fighting the Fall gets 4.5 stars. ♥