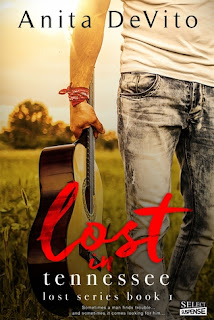 
Country superstar Butch McCormick is feeling lost. While his career as a singer and songwriter continues to keep him at the top of the charts and reaping awards, he's about to file divorce papers on his third wife. The house he shared with her in California never felt like home and now he's trying to create one in the old farm house that belonged to his parents and his grandparents before them. He wants to find a place for himself, where he fits in, can claim for himself, and begin to live a life that means something. He's ready to get his hands dirty and do the work necessary. Then a fiery redhead who conjures dirty thoughts and deep feelings that inspire him to write songs about her and to imagine a life with her comes along unexpectedly.

Architect Kate Riley has gotten herself lost in Tennessee. All she wants is someone to point her in the direction so that she can get to where she's supposed to be going. When she ends up on Elderberry Farm and offers the smokin' hot cowboy a helping hand, her life begins to go in a direction she had never planned for. She has a job to do and once that project is over, she's off to the next one. But one day with the faux farmer who turns out to be one of country music top draws turns into weeks on end, she ends up fighting a losing battle when it comes to her feelings for him. However, when women connected to him come up murdered, Kate may wish she had never found her way to Elderberry Farm or Butch McCormick.

When I first saw the blurb for this series starter and debut release from author Anita DeVito, all I remember thinking was "Ooh! A country singer in a romantic suspense thriller tale... Veeerrry interesting." And then I started reading Lost in Tennessee and was swept away by the quirky combination of  a cast off-the-wall characters who were hilariously intense in a variety of ways and a story that lulled you into complacency with a romance between two people who seemed to make sense out of all the nonsense they found themselves in ever since their paths crossed before you're thrown into a murder mystery! This was such a uniquely creative story, one that I devoured in a single sitting, all 450+ pages of it. Note to self: Do not start a book this long after midnight because it leads to not getting any sleep at all.

If I'm being totally honest here, I figured out who was behind the murders very early on. It was clear to me because of the way my top suspect was acting and the fact that they seemed to have a motive. I'll admit that there was a time or two where I wanted to shake a couple of the characters so that they would open their eyes and see where all the clues were pointing. But even with my knowing who was doing all those dastardly deeds, I never found interest waning or wandering. While I was expecting twists to the mystery part, I was taken by surprise when there were twists for the love story between Butch and Kate. The story itself could have been told in several other ways but I love how the author stuck to her guns and did it her way. Anita DeVito is a new writer but if she keeps churning out books of this caliber, she'll be one to watch.

Butch McCormick and Kate Riley were such a fabulous pair of main characters because they stood out from so many others that came before them that shared similar character outlines. Butch was country music royalty but the man never cheated on any of his wives and he wasn't drowning himself in booze or hopping from one bed to another. Then you've got the lovely and lively Kate who was a woman after my own heart with her feisty nature and desire to protect and take care of Butch. Surrounding these two were supporting characters that I'm looking forward to reading more about as the series continues, especially Jeb McCromick, Tom Riley, and Hyde Spence. Based on Chapter 24, I'm guessing Jeb's story may be next, but whether it is or isn't, it'll have a spot reserved on my to-be-read list. Lost in Tennessee gets five stars. ♥