Review: His Temporary Fix by Sofia Grey (Love at the Beach #2) 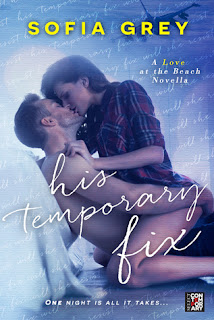 Holly is temporarily in New Zealand to take care of her younger brother while he recuperates from injuries sustained during a car accident. When she comes across a soldier along the surf, she can't help but reach out in an effort to make him feel better. It's clear that Zack's feeling a great deal of pain and sorrow and when she learns that it's due to the unexpected loss of his sister, she listens to her heart and provides whatever comfort he needs. What was supposed to be a one-time thing has both of them craving for even more. They're both in the country for a limited period of time and history should have taught Holly to avoid becoming involved with someone like Zack, but could there be a chance for something permanent?

His Temporary Fix is the second novella in author Sofia Grey's Love at the Beach series and while the setting is the same as the one in the first novella, both books can be read independently of each other. The premise of this story was one that tempted me immediately and I had high hopes because it held such promise. Unfortunately, the love story devolved into a murder mystery of sorts involving the death of Zack's sister and then there was just all this other stuff thrown in (i.e. a dog trapped in an overheated car, Zack's mother warning Holly away, the connection between Holly's brother and Zack's late sister, etc.). I wish we could have stuck to the love story and Zack mourning his sister instead of a smorgasbord of sorts.

Zack and Holly falling for one another would have been okay, even if it happened over a short period of time, but I had difficulty believing there was something more than lust and sex going on between these two. Plus, Holly seemed so much more into Zack than the other way around. The whole mystery aspect regarding what really happened to Zack's sister felt more like it was thrown in hopes of adding more, albeit unnecessary, dimension to the story. I couldn't help but think "Less is more." I read this novella only to find out that book one came out last year and I ended up liking that one more than I did this one. His Temporary Fix fell short of expectations, but I hope any future installments will be better. Three stars. ♥