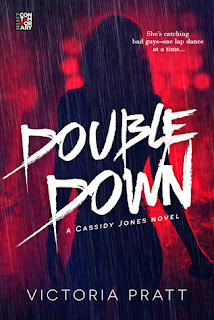 When the murder of the owner of a strip club with supposed mob family ties becomes known, police officer Cassidy Jones is assigned to go undercover as a stripper in order to find clues as to who may have wanted the man dead. This is Cass's opportunity to finally prove to those in the department who question her abilities simply because she's a woman. With her cop skills and lessons from pole dancing under her belt, she's ready to do whatever it takes to wade through potential suspects and evidence to bring the guilty perpetrator down. What she isn't quite prepared for is the chemistry between her and the victim's youngest brother. Add to that another murder and a police detective threatening her and everything just became more complicated. Will she find her killer before she ends up compromising her case or a victim?

Double Down is the first novel in the Cassidy Jones romantic suspense series from first-time author Victoria Pratt. This was a highly enjoyable novel about a police officer turned police detective named Cassidy Jones. She's in her late twenties and is tenacious about her job, willing to do what's necessary to build and solve her case. She's aided by her best friend who just happens to be the coroner as well as her partner who resembles a living Ken doll. When she goes undercover to solve the murder of a supposed local mobster, she meets and becomes attracted to the man's younger brother, thirty-eight-year-old casino head Lorenzo Polonco. Instead of remaining a stripper, however, Lorenzo notices her prowess behind the bar and makes her the new nighttime bartender at Double Down, his late brother's strip club.

The star of this book really was Cassidy Jones and everyone else basically plays support. Her romance with Lorenzo, which one would consider taboo since he is, technically, her boss at Double Down, takes a good long while to level up because Cass doesn't want to become too involved with him while she's working the case. I liked the Cass and Lorenzo pairing, but I must admit that I became rather curious about Detective Jay Coleman because while I did wonder if what was happening between him and Cass was like a playground thing of a boy trying to piss off the girl he likes, it seemed to be much more near the end of the book. I'm looking forward to see if and when that will all play out. With a great murder mystery and a good cast of characters, Double Down gets 4.5 stars and Cassidy Jones is a series I shall be keeping an eye on. ♥