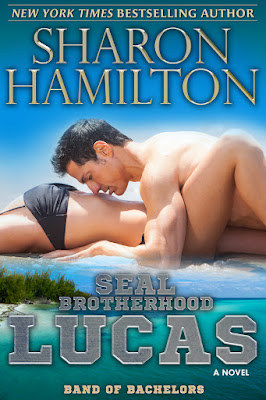 
About SEAL Brotherhood: Lucas
Special Operator Lucas Shipley thought his living arrangement was temporary, since getting booted from the house by his wife. He sleeps on a couch in the apartment with four other divorced Navy SEALs, thinking he’ll get the call to come home any day. He ignores the not-so-helpful advice his buddies are giving him about marriage, women and romance. Until he gets served with divorce papers.

Realtor Marcy Gelland is hired by Lucas’ soon-to-be ex-wife to liquidate all their real estate holdings and help her orchestrate a speedy departure from Lucas’ life. Based on what the hot-headed SEAL wife has told her, Marcy understands Lucas deserves every ounce of pain coming his way.

But when Marcy and Lucas are left alone together in the remote Northern California woods, they ignite a personal bonfire that threatens to burn down the whole forest. Marcy is forced to see she is wrong about Lucas.

Amidst the backdrop of hardened bachelor SEALs with their unsolicited, anti-long-term relationship advice, and a terrorist training camp operating nearby, Lucas must do what he’s always done: be the hero and save the day. But will it be in time to save Marcy? 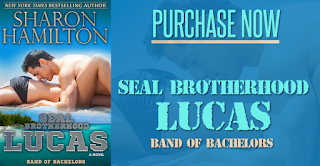 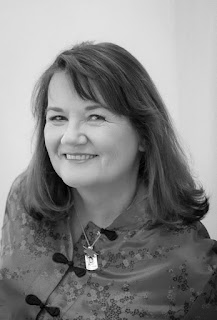 Sharon’s NYT and USA Today bestselling novels are almost-erotic Navy SEAL stories of the SEAL Brotherhood. Her characters follow a spicy road to redemption through passion and true love. All of her SEAL Brotherhood series are available in audio book. She has maintained an Amazon top 100 author status in Romantic Suspense since the end of 2012.

Her Guardian Angels struggle with the human charges they are sent to save, often escaping their vanilla world of Heaven for the brief human one. You won’t find any of these beings in any Sunday school class. All three books in this popular series are also in print and audio formats.


A lifelong organic gardener, Sharon lives with her husband in the Wine Country of Northern California, where most of her stories take place. When she’s not writing, she’s getting verra verra dirty in the mud, or wandering Farmer’s Markets looking for new Heirloom varieties of vegetables and flowers.


Excerpt from SEAL Brotherhood: Lucas
Lucas could see T.J. was relieved. “Honored to meet you, Reverend Banks. T.J. has talked about you non-stop since we found out you were coming out here,” Lucas said as he shook the pastor’s massive hand.

Forsythe was going over some photos and stopped to greet T.J.’s friend. “We’re most grateful for any help you can give us.”

Kyle showed Banks the photo of the Sheik. “This is the guy we’re looking for, reverend.”

Banks studied the photo. “Hmm. Reminds me of a real bad dude came through here last year, just before Christmas, but it wasn’t this guy. Big, grown bad-ass men at the prison were bowing on their knees to him. He swept through here, had a couple huge services at the Mosque and there were crowds clear across the street, blocking traffic. Police had to shut down the whole area and it was on the news. I don’t remember his name, but he was someone big, very big in their circle.”

“Kyle,” Jackie slipped between them. “You guys find some news footage. Let me listen to what he’s saying and I’ll tell you exactly what he was all about. This guy I don’t know, but he must be a powerful Imam from Iraq, maybe Syria,” offered Jackie Daniels.

Forsythe indicated he’d get someone working on it.

“So you wanna catch us up as far as what’s been happening in the community?” T.J. asked.

“Word has it there’s going to be a coordinated effort at a strike, or something of that nature. But the thing that bothers me is that this prison isn’t the only place. I got a friend out west works in the central valley of California, and he’s run across the same thing. This Imam I was telling you about went to all those places, too.” Banks looked around him at all the SEALs. “So what’re you doing here in Tennessee? Not exactly a place I’d expect to see this kind of crowd.”