Review: One Christmas Wish by Sara Richardson (Heart of the Rockies #2.5) 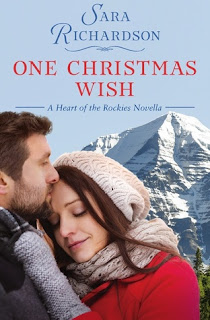 Her brother is about to marry the love of his life and all Julia Noble wants is to live her own life, away from the overly protective watch of her mother and brother. She knows they care too much about her to see her encounter any sort of difficulty, but she also knows that she's destined to spend the rest of her life in a wheelchair and now she's ready to do it on her terms. She doesn't want to rely on anyone and has her plans all laid out. The one kink comes in the form of Isaac Noah, her brother's childhood best friend and the only boy she's ever loved. Isaac disappeared from her life soon after her accident twelve years ago and as much as he still stirs in her the same feelings she's always had for him, Julia isn't sure if she's ready to believe there's no other place he'd rather be than by her side this Christmas and for the rest of their lives.

One Christmas Wish is a holiday novella and the third release in the Sara Richardson-penned Heart of the Rockies series. Julia Noble was a very memorable supporting character in the second novel, Something Like Love, and she continues to bring her formidable spirit in her own story. She may be stuck in a wheelchair but she doesn't want to remain stuck in her life. While she appreciates the care and concern of her family and loved ones, she feels stifled by the protectiveness and eagerness to do everything for her. She has an independent streak to her and being in a wheelchair doesn't mean that she has to be dependent on others for every single thing. She's an inspiring female lead character, and while there is focus on her being disabled, she's never portrayed as someone unable to be a woman with dreams, wants, and needs.

Isaac is a man after my own heart. There's no doubting just how much he loves Julia and when he makes certain admissions in the story, I found myself sighing and releasing an absolutely warranted "Awww!" He's the perfect match for someone like Julia because he doesn't doubt her capacity to do whatever she sets her heart on but simply wants to be there to support her and give her anything she may require of him. He was gone for twelve years but she was never far from his thoughts and now that he's back, he wants to prove that he has no intention of ever leaving her alone again. The addition of a puppy who happens to share the same name as my very own dog earns this book bonus points. If it's a holiday tale with heart that is also a second chance romance you want, go with the five-starred One Christmas Wish. ♥