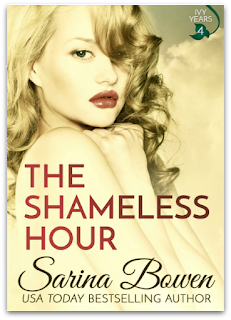 Senior Isabelle Hall has never hidden the fact that she enjoys sex and while she's had her fair share of partners, she doesn't appreciate anyone labeling her a slut or a whore. After all, what she does is always consensual, just like when she and her downstairs neighbor, sophomore and varsity soccer player Rafael Santiago, spent one unforgettable night together. But Rafe almost seems regretful about what happened between them, stressing that he isn't the type of guy who engages in one-night stands. To get her mind off Rafe's reaction, she decides to hook up with a guy belonging to a fraternity that has a reputation for shaming girls. When Bella falls victim to one of their vicious shame campaigns, she is beyond humiliated and declares she's done with guys, but Rafe refuses to walk away and proves to be the one guy Bella needs.

The Shameless Hour is the fourth full-length book and fifth overall release in Sarina Bowen's Ivy Years series and tells the story of Bella Hall, introduced in the prior installment, The Understatement of the Year, as the team manager for the men's hockey team and Michael Graham and John Rikker's closest friend in Harkness. She's confident and isn't afraid of owning her sexuality, even when others see her as something far more derogatory than what she is--a young woman engaging her desires. When she ends up with a sexually transmitted disease after a hook-up, her decision to inform her one-time partner leads to him and his fellow fraternity brothers humiliating her by way of a shaming campaign that becomes viral. It doesn't mention her name or show her face but that also doesn't negate the fact that she's been victimized.

Bella's story is one that brings with it an air of familiarity because I think we've all come across at least one news item of a woman who is the victim of something similar or even much worse is blamed for what happened to her because of her reputation or possibly because of they way she carries herself or the manner in which she dresses. Shaming is simply another form of bullying and that kind of abusive behavior is one that should never be condoned or minimized. Bella's decision to let things be after what was done to her is sadly not uncommon but she proves to be an inspiring female lead character, allowing the love and support of Rafe, her neighbor Lianne Challice, and her friends on the hockey team to become a source of strength and empowerment and taking back what was stolen by the frat boys who shamed her.

Aside from what happened to Bella, her love story with Rafe was an interesting one because of his stand on being in a committed relationship and Bella's insistence that such a thing is not necessary to engage in sex. They're very different people, with Bella coming off as the naughty to Rafe's nice, but they also fit as a couple, balancing each other out where it's needed most. How they are with their families also brings a clearer view as to why their stands on relationships differ, but Bella's relationships with her friends on the hockey team prove that she's able to commit with those that she can entrust her faith in and are able to accept her wholeheartedly. This was a truly well-written story about a young woman reclaiming who she is and going about it in her own way and her own time. I'm giving The Shameless Hour five out of five stars. ♥