Review: Hunter of Her Heart by Kaylie Newell (Wolfe Creek #2) 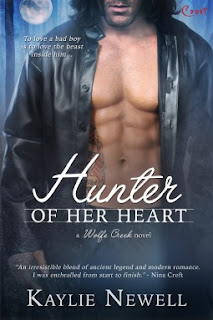 Zane Wolfe has been lectured time and again by his older brother and aunt that it's time for him to grow up and make the necessary changes that an adult like him needs to get on with. Commitment has never really been part of his vocabulary, so as much as he loves Candi Brooks, he's yet to make a proposal of marriage. But then Zane does begin to undergo changes, ones that he has no control over and appear to give credence to the stories that have been spread about Wolfe Creek and the generations that came before him. He's not handling the transition well, but when he learns that Candi's going through her own kind of transition, Zane will have to choose between being wild and free or taking control of his destiny.

Hunter of Her Heart is the second story in author Kaylie Newell's Wolfe Creek series and takes place some time after the events in the first book, Lone Wolfe Protector. Zane Wolfe and Candi Brooks were memorable supporting characters who have finally snagged the spotlight here, and deservedly so, since their being an on-again, off-again couple was hinted at before. Readers get a clearer idea of what exactly has been causing Zane to become a different kind of person and it appears that he's going through a host of changes that he isn't dealing with all that well. Both Zane and Candi love each other, but Zane waffles on making their relationship a permanent one, even after Candi lets him know about their becoming parents.

This was a fairly interesting story that gives readers an idea of the difficulty that someone like Zane is undergoing. Aimee already had a year to adjust and her situation was already as is in book one. Here, we get to see Zane's changes and the adjustments he's forced to make because it's not as if he really has much say in the matter. While he and his older brother Koda both have family loyalty and love the women they're with, Zane isn't as decisive as Koda and there are moments that you want to smack the guy for his poor choices, though I do get that he had a lot on his plate, what with learning about Candi's pregnancy and his becoming what his father was. All in all, Hunter of Her Heart was a good four-starred follow-up. ♥

Purchase Hunter of Her Heart on Amazon | B&N | Kobo.