Review: The Year We Fell Down by Sarina Bowen (Ivy Years #1) 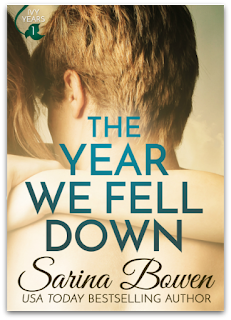 "Why would you complicate our friendship?" I whispered.

When an accident costs ice hockey player Corey Callahan to lose the use of her legs, the dream of becoming part of the women's varsity team of Harkness College is one that will never come true. Residing in a dorm room in McMerrin Hall that is meant to make things a bit easier for a currently wheelchair-bound student has an added perk to it: her neighbor is the very hot Adam Hartley, an ice hockey varsity player who broke his leg in two places. As tempting as he may be, he's got the kind of girlfriend that serves as a reminder to Corey that she isn't in the same league. But the two neighbors forge a strong bond, one that is meant to draw a line in the sand, a line that neither of them are planning to cross...until the night that they do and both Corey and Hartley will have to decide if they can ever go back to just being friends.

The Year We Fell Down is the first novel in the very popular Ivy Years series from author Sarina Bowen and is a book that I've heard a lot of good things about. When I finally got the chance to review the galley for the latest release in the series, The Fifteenth Minute, I decided it was time to read all the ones that came before it (because that's just how I roll...God, does anyone actually still say that?). After all, this series starter has been waiting for me on my Kindle app since March 2014 and now I feel rather ashamed that it took me this long to read it. I admit it--I'm a book hoarder and I've got a butt-load of books that are still waiting to be read but thank goodness I came to my senses and read this one because once I began, there was I voraciously made my way through each book in the series. This was book bingeing at its finest.

The friends-to-lovers trope is probably my top favorite in the romance genre because there's already a foundation that's been set over a certain period of time by the two main characters. In the case of Corey and Hartley, the length of time they've been friends may not be substantial but there's a high level of trust and respect between them and there's no doubting the affection they both have for each other. So, while they may not have been best friends for very long, we do get to see their relationship develop from being virtual strangers to good friends to besties and then to the something more that we all anticipate them getting to. There was no rushing these two and that's probably my favorite thing about this book. I liked that it evolved in its own good time and that they had to overcome hurdles to get their happily-ever-after.

This book had a cast of characters that I would probably consider one of my top favorites ever. You become curious about the supporting characters mentioned and wonder what kind of stories they've got waiting to be told while still remaining focused on the love story going on between Corey and Hartley. Then you've got the respective side stories that the main characters bring with them and that they need to get through in order for them to move forward with their lives, both of which add dimension to this hockey-loving couple that's now joined the ranks of my favorite fictional couples. This isn't the first book I've come across that had friends falling in love (nor is it the first focused on the sport of ice hockey), but dare I say that The Year We Fell Down is how friends-to-lovers stories should be written. Five-plus stars. ♥

Download The Year We Fell Down on Amazon | B&N | Kobo.