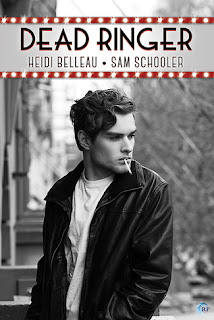 When his grandmother, a former actress on the silver screen, passes away, nineteen-year-old Brandon Ringer is given ownership of her home and everything in it. There are fees, utilities, and other payables that Brandon will have to worry about, meaning he's going to need a steady source of income. He's a high school dropout who was thrown out of the house by his parents. Bearing a striking resemblance to his late grandfather, film legend James Ringer, Brandon uses what he's been given and becomes an escort for a company offering Hollywood lookalikes. He refuses to be anything like his grandfather, who died in a car accident at the age of twenty-one, but if looking like him helps bring in money, Brandon would live with it.

Percy Charles may be twenty-one years old but he's barely living the kind of life you expect from people his age. He's constantly reminded by his caregiver that he's a burden and that there wouldn't be much hope for him to live normally, what with his juvenile idiopathic arthritis. The one thing that brings him happiness is his love for movies, especially older films that have been considered classics. His favorite actor is none other than James Ringer, and when he stumbles a face that looks eerily like that of his idol, Percy finds himself booking an escort named Jim Ringer. They may not have much in common, but there's a definite connection, one that will be tested when Percy learns who his James Ringer double actually is.

Dead Ringer is a standalone romance from authors Heidi Belleau and Sam Schooler and brings together two of my favorites: old movies and M/M love stories. This is a romance between Brandon Ringer and Percy Charles, but at the center of it all is James Ringer, a Hollywood actor who made a name for himself by being somewhat of a rebel. In my head, I was picturing a combination of James Dean (one of my favorite actors ever) and Marlon Brando in his younger years. It's possible that the legend that is James Dean served as the inspiration for the James Ringer character since they both died in their twenties in car accidents and had endless rumors swirling around them even after their deaths, including their sexuality.

This has got to be one of the more original stories I've read this year and I liked that both Brandon and Percy had very interesting individual stories that had to be told. They had their struggles--Brandon was someone who just lost the only person who cared about him and was virtually alone trying to make ends meet while living in a mansion while Percy didn't want for money but his parents had abandoned him in the care of his mentally and emotionally abusive caregiver and he didn't have any sort of freedom. Aside from trying to make sense of what was going on between the two of them, they were also trying to find their place in the world, and along the way, they meet other supporting characters who were memorable.

Books that are written by more than one author only work if the reader can't distinguish where one writer begins and where the other ends. I've read Heidi Belleau's Flesh Cartel series as well as The Burnt Toast B&B (all of which were co-written with Rachel Haimowitz) and I was introduced to Sam Schooler's writing by way of her contribution to the Silver & Gold anthology, and it appears that they've created a seamless story with this first joint effort. This wasn't a sappy love story but there were a few sweet moments between Brandon and Percy. Dead Ringer was about two separate journeys that converged into one when two young men met, became friends, and fell in love. I hope this five-starred read goes on your TBR list. ♥