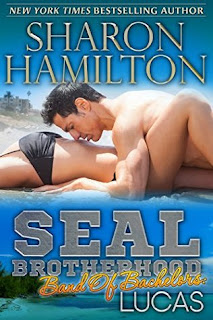 Being served with divorce papers was the last thing Lucas Shipley expected from his wife. He thought that after she had cooled down, he would be returning home to her and their two children. All hope is lost when his soon-to-be ex-wife calls in a realtor to sell the homes they own, and while she treats him as if he's some sort of cheating louse at first, Marcy Gelland quickly begins to wonder if Lucas's estranged wife may have made him come off worse than he actually was. When they end up in Lucas's cabin, Lucas and Marcy cross a line that neither of them can ever come back from. As soon as it becomes clear to others just how important Marcy has become to Lucas, much more than their careers and reputations could be at stake.

SEAL Brotherhood: Lucas is the first novel in the Band of Bachelors series from author Sharon Hamilton. This is my first go at anything written by the author, though I have seen her back titles on e-retailers and know her penchant for having lead characters who are SEALs. With a solid reputation as a bestselling author, my expectations coming into this book were rather high and maybe unfairly so. Sad to say, I was rather disappointed with how the story played out. I have nothing against insta-love, but that only works for me if I feel a really strong connection between the lead characters. While Lucas Shipley and Marcy Gelland had some semblance of attraction, I simply didn't see these two falling for each other right away.

The thing between Lucas and Marcy was on hyper speed, but it felt as if she was much deeper into the insta-relationship than he was, proven time and again when she appeared to be more bothered by what happened after Lucas had to leave for training. Then you've got the woman who may have filed for divorce but with whom he still remains married, Connie Shipley, who is uncomfortably absurd with her psychotic actions and reactions. How she finds out about Lucas and Marcy also didn't make much sense because of the time frame that everything supposedly happened in. Everything just felt rushed and then it suddenly dragged once Lucas returned to training and Marcy was dealing with the aftermath of Connie's discovery.

There are quite a few things that don't get resolved in this book, so I'm going to assume that they'll be tackled further as the series continues. And then there are all of those bachelors, whether single or divorced, that happen to be Lucas's friends and fellow SEALs. Some of them seem interesting, while others...well...let's just say I'm going to hold off (negative) judgment for now. Overall, the romance between Lucas and Marcy was okay and the suspense regarding terrorists in on American soil was a bit better, but I simply felt underwhelmed by it all. Basically, SEAL Brotherhood: Lucas was just okay, and while that isn't terrible, I really wanted much more, considering the author's reputation. Three stars. ♥